Along with the equally influential 2001: A Space Odyssey, Easy Rider (1969) was one of the key “trip” movies of the late 60s, making its music more expressive than its dialogue and defining a generational divide by cutting audiences into two.  As critic J. Hoberman has noted, the film “was above all fashionable” when it first appeared “and hence it dated almost immediately”. Yet arguably it is this datedness (unlike that of 2001) that defines much of its value today, as a time capsule offering certain parallels of hippies versus rednecks with current struggles between progressives and minorities versus reactionary Trump supporters. 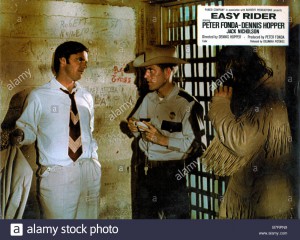 Even though Easy Rider, according to auteurist protocols, is mainly associated with its director, costar, and cowriter, Dennis Hopper, it seems appropriate that it’s being shown in Bologna as part of a tribute to Peter Fonda, its producer, costar, and cowriter. Fonda actually originated the project by pitching its basic premise — a contemporary Western with motorcycles replacing horses as its two heroes, named Wyatt (Fonda) and Billy (Hopper) to suggest Wyatt Earp and Billy the Kid, emerge from a drug score to drive east across the country to attend the New Orleans Mardi Gras. And it could be argued that Terry Southern, the film’s principal writer (see https://pleasekillme.com/who-wrote-easy-rider/), provided most of the meat lodged between the sandwich slices of Wyatt (relatively Christian) and Billy (relatively pagan) — namely, a figure standing halfway between the heroes and villains, Jack Nicholson’s career-producing role as an alcoholic small-town lawyer who briefly joins them before he’s murdered by hate-filled compatriots. 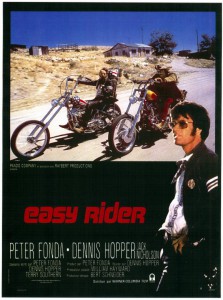 The Mardi Gras material, shot in 16mm and edited more discontinuously than the rest to suggest the characters’ LSD trips, was improvised, as was an encounter between Wyatt, Billy, George and several locals at a roadside café who were invited to speak for and as themselves. Along with the cast taking real drugs, this conveys a documentary authenticity that helps one to overlook the metaphysical pretensions and entitlements of the cowboy heroes.