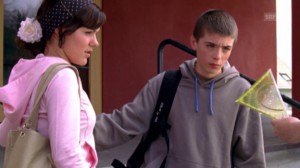 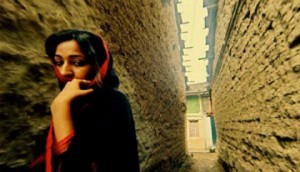 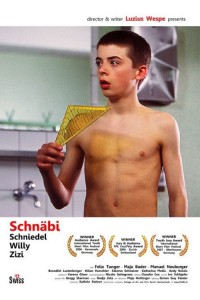 One particularly striking illustration of this: a screening of Schnäbi, Luzius Wespe’s 12-minute prizewinner in the Children Film Competition — a charming Swiss-German film about 14-year-olds, selected by a jury of five kids aged 13 or 14, all of whom appeared onstage to present their award. What I found surprising was a sexual frankness I wouldn’t expect to find in any equivalent films made for American kids — or, indeed, for kids in many other places in the world. Without being in the least bit lewd, this well-acted short recounts the story of a blossoming romance between a skinny boy and a somewhat sexually developed girl in his class who helps him with his math, Pythagorus in particular. The film opens with a halting dialogue between them (see photo) about their respective attitudes toward the jiggling of her breasts — whether she minds that they jiggle and whether she minds him staring at them. (The answer to both questions turns out to be no.)

A subsequent scene in the locker room between boys at the school charts the process by which they decide that the boy with the longest penis is the one entitled to win the girl with the jiggling breasts. The measuring is handled by each boy with a ruler, turning away from the camera and the other boys as he does so. But the hero, fearing that he won’t measure up, refuses to participate. When the heroine gets wind of this contest, she rebuffs the hero, believing that he’s complicit in the game. But then the other boys, irritated by his lack of complicity, pull off all his clothes and push him out into the school corridor, shutting the door behind him. Then, when the heroine comes along, she takes pity on his embarrassment and hands over the pair of sweat pants she’s carrying. After he puts them on, they exchange warm looks, making it clear that their romance has been rekindled.

If anyone in the audience at Oberhausen’s closing ceremony, child or adult, was in the least bit shocked or perturbed by anything in this film, they didn’t give any sign of it. The overall mood was amused and relaxed, but without any sniggers — leading me to suspect that we might be able to learn something from such behavior.