Dragged Under [The Unmaking of Roberto Begnini’s PINOCCHIO]

From the Chicago Reader (January 3, 2003). I was very touched when, over a dozen years later, in Lisbon, Nicoletta Braschi (who was performing Samuel Beckett’s Happy Days there), Begnini’s partner, thanked me for this piece. — J.R.

The worst movie I saw all year was the dubbed and recut version of Roberto Benigni’s Pinocchio, hastily released by Miramax on Christmas Day. Yet I could easily have placed Benigni’s subtitled original in my top 50, if not top 40.

The late-19th-century source novel, Carlo Collodi’s The Adventures of Pinocchio, is so quintessentially Italian that adaptations lose flavor and meaning if they don’t include that aspect. Walt Disney’s 1940 animated feature also failed to include the original’s sense of poverty, its cosmic vision of brutality, and many other disturbing elements, then heaped on the sentimentality; the studio got away with it because the film at least had a style and an occasionally disturbing vision of its own.

Benigni’s adaptation replicates more of the Disney sentimentality than I would have liked, but it returns to the Italian original, altering it mainly to fit Benigni’s irreverent and very Italian sense of comedy. (Federico Fellini had hoped to adapt the story with Benigni as the lead, and this film reflects some of Fellini’s broadness and comic-strip floridity.) Benigni’s performance, to which his voice is critical, acknowledges the weirdness of having a middle-aged man play the title role (in the original he’s more like an Italian version of Pee-wee Herman). In the recut film, Benigni’s voice is dubbed by Breckin Meyer; the lip-synching is terrible, and Meyer, who’s clearly American, sounds much younger than Benigni looks. All of which makes the character simply grotesque.

Most of the original’s other Italian characteristics might have survived if the dubbers had shown any sensitivity. The few that remain — such as hand gestures and other forms of body language — only confuse matters, since we’re now apparently following American characters in a European period setting. And while the brisk pacing of the 111-minute original is exemplary, the shorter recut version drags interminably — when it isn’t having jerky continuity problems. In short, Miramax has deleted much of Benigni’s work and replaced it with offensive junk. No wonder the sparse Friday-night audience of kids and adults I saw it with was restless. 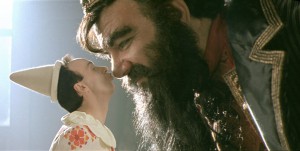