From the Chicago Reader (December 20, 2002). For the record, I regard Downsizing as Payne’s best film to date, even if it’s less perfectly shaped than Election, but representing as much of a leap from About Schmidt as that film was from Citizen Ruth. — J.R.

I was so offended by the cynicism and class condescension of Citizen Ruth, Alexander Payne’s first feature, that I’ve remained suspicious of his work even as he’s emerged as a more skillful director in Election and this still more ambitious and accomplished film. It’s a very free adaptation of a Louis Begley novel, transposed from Manhattan to Payne’s native Nebraska, in which Jack Nicholson has been asked to put on some weight and finally act his age. The problem is he’s still Jack Nicholson, exuding his know-it-all charisma even when playing a clueless asshole and not nearly as inventive as he was in a much less showy part in The Pledge. The contrivance here by which he bares his soul — by mouthing letters to an African boy he’s helping to support from afar — is bogus and forced, and even the more observant moments in this odyssey of a bored and boring widower can’t entirely escape the jeering tone that remains Payne’s stock-in-trade. Much more deserving of plaudits is the secondary cast — Hope Davis as Schmidt’s resentful daughter, Dermot Mulroney as the water-bed salesman she’s engaged to, and, above all, Kathy Bates in a hilarious turn as the latter’s New Age mother. 124 min. (JR) 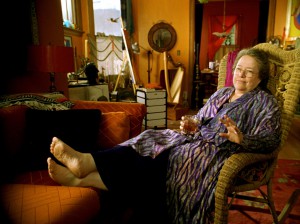