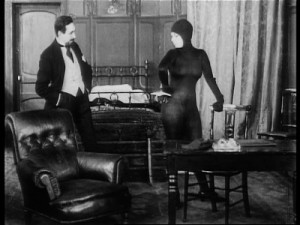 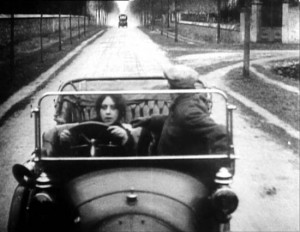 Louis Feuillade’s extraordinary ten-part silent serial of 1916, running just under eight hours, is one of the supreme delights of film–an account of the exploits of an all-powerful group of criminals called the Vampire Gang, headed by the infamous Irma Vep (Musidora), whose name is incidentally an anagram for “vampire.” Filmed mainly in Paris locations, Feuillade’s masterpiece combines documentary with fantasy to create a dense world of multiple disguises, secret passageways, poison rings, and evil master plots that assumes an awesome cumulative power: the everyday world of the French bourgeoisie, personified by the hapless sleuth hero, during the height of World War I is imbued with an unseen terror that no amount of virtuous detection can ever efface entirely. (Significantly, as in many of Feuillade’s other serials, the villains are a good deal more fascinating than the relatively square hero, although a comic undertaker and the leader of a rival gang are periodically on hand to help him out.) Because none of Feuillade’s complete serials is available in the U.S., this special screening helps to fill an enormous gap in our sense of film history. One of the most prolific directors who ever lived, Feuillade is today arguably a good deal more entertaining than Griffith, and unquestionably much more modern: his mastery of deep-focus mise en scene is astonishing, and its influence on Fritz Lang as well as Luis Bunuel and other Surrealists remains one of his major legacies. For the past 20-odd years, this serial has received only a few screenings in the U.S., in prints that were missing all of the film’s intertitles; now that the Cinematheque Francaise has recently restored the film in toto, it is possible to appreciate the full glory of this hallucinatory work for the first time since the teens. Ordinarily, after giving a film four stars, I wouldn’t consider it necessary to make it a Critic’s Choice as well; but this is such an unprecedented event for Chicago that I can’t recommend it too highly. (Film Center, Art Institute, Columbus Drive at Jackson, part one: Saturday, October 10, 6:00, part two: Sunday, October 11, 4:30, 443-3737)