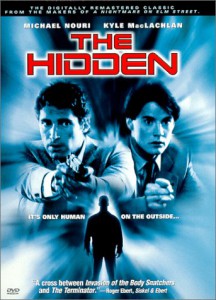 Michael Nouri and Kyle MacLachlan (Dune, Blue Velvet) star in this 1987 SF crime thriller, directed by Jack Sholder, about a police detective investigating a series of mysterious crimes who discovers that the perpetrators are all inhabited by an alien life form. Despite its reputation as a sleeper, this isn’t much more than a capably directed version of a film we’ve already seen many times before: some well-executed car chases and efficient acting (including proof that MacLachlan can be weird without David Lynch), but not much development of the familiar possession theme a la Heinlein’s The Puppet Masters. Unfortunately, many of the most intriguing details —  such as the alien’s taste for loud pop music — are left hanging rather than fleshed out, and the film eventually reduces itself to mechanical (if well-crafted) action sequences. (JR) 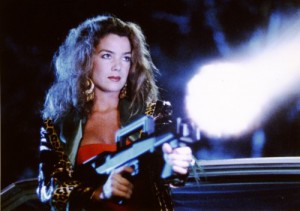