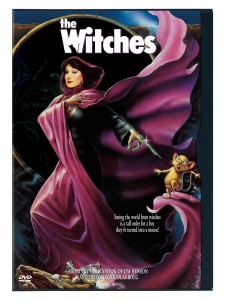 A minor but very enjoyable Nicolas Roeg fairy tale — adapted by Allan Scott from Roald Dahl’s novel, and one of the last films on which Muppet master Jim Henson worked — about a very wicked Grand High Witch (Anjelica Huston) in contemporary England with a plan to turn all that country’s children into mice. She hatches this plot at a plush seaside resort, where the other main characters are staying, including a nine-year-old American orphan (Chicagoan Jasen Fisher) — one of the witch’s first victims — and his Norwegian grandmother (Mai Zetterling). Forsaking the scattershot cutting of his usual work, Roeg seems to regard this as a relatively impersonal project, but he and the actors (especially Huston) still seem to be having a great deal of fun with it. One of many clear advantages this funny and scary 1989 fantasy-adventure has over most Disney products is its live-action visual bravado, evident in both the stylization of the witches and the profusion of mouse-point-of-view shots. PG, 91 min. (JR)