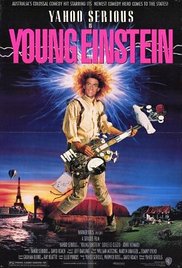 Postmodernism with a vengeance. This 1988 Australian comedy made some tidal waves on its home turf — perhaps because, like the subsequent and even more enjoyable Children of the Revolution, it offers a cheerful alternative to the usual Australian self-hatred. A distant cousin of Bill & Ted’s Excellent Adventure, it has the charm and advantage of a genuine visual style of its own, both laconic and witty, as well as a likably dopey plot and cast of characters. Directed, written, coproduced by, and starring Yahoo Serious, the movie follows the adventures of a teenage Tasmanian apple farmer named Albert Einstein, who splits the atom in order to produce a beer that contains bubbles, falls in love with Marie Curie (Odile le Clezio) and follows her to Paris, meets Charles Darwin, and invents rock ‘n’ roll in the process of draining off the atomic energy in a nuclear beer keg fashioned by the villain (John Howard). Invert the auteur’s name and you get a partial notion of what he’s up to — which is not exactly serious in its own right, but is at least serious from a yahoo standpoint. 90 min. (JR)