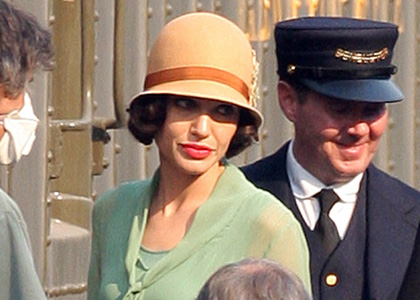 Far be it for me to invent wimpy liberal alibis for police corruption in 1928 Los Angeles, punitive electroshock, a pederast serial killer, and cosmic injustice in general, but the main thing wrong with Clint Eastwood’s view of evil in this movie is how childish it seems. I don’t care if he’s 78 and apparently has some fixation about innocent boys abducted by sex maniacs; even if the plot periodically suggests a remake of Mystic River, the cackling villains belong in a Hopalong Cassidy western, not to mention Dirty Harry. The opening intertitle calls this “a true story,” but whether it’s verifiable that Christine Collins was really saved from electroshock just in the nick of time by Hopalong (John Malkovich, in the film’s only interesting performance) coming to her rescue is a matter worthy of some skepticism. And even if that really happened, would it justify Angelina Jolie’s terrible Oscar-mongering performance and all the attendant grandstanding, gigantic close-ups, and directorial pretensions that this movie’s “dark” view of human existence is some form of maturity? All I could think about was the usual compulsive kid stuff–McCain and Palin fulminating about the “good guys” and “bad guys”. [11/2/08]