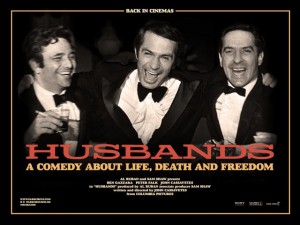 Subtitled “A Comedy about Life, Death and Freedom,” John Cassavetes’ most politically incorrect and machocentric movie (1970), made after the huge commercial success of his 1968 Faces and exercising both the creative control and the studio support it suddenly made possible, is arguably the most improvised and workshopped of his features. Inspired in part by the death of Cassavetes’ older brother Nick in 1957 at the age of 30, the film recounts what happens to a trio of 40ish east coast suburbanites (Cassavetes, Peter Falk, and Ben Gazzara) when their best friend dies and they decide to play hooky from their lives and families to recover their camaraderie and identities. But even though their collective flight seemingly has something to do with life, death, and freedom, there isn’t a Huck Finn in the bunch; they’re all Tom Sawyers, too desperate in their frantic fun and games to be as comic as they want to see themselves. Their fear of female assertiveness and their periodic brutality, as well as Cassavetes’ determination to follow the actors’ instincts and movements wherever they go without chalk marks are likely what inspired Elaine May to co-opt Cassavetes, Falk, and Husband’s cinematographer Victor J. Kemper for her masterpiece Mikey and Nicky a few years later. 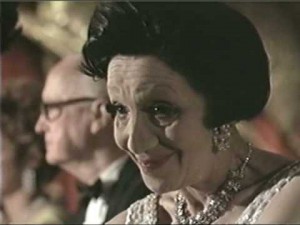 After Harry (Gazzara) has a violent altercation with his wife and decides to fly to London, Gus (Cassavetes) and Archie (Falk) agree to join him. And when the three pals, after a trip to a casino, bring women back to their adjoining hotel rooms, Husbands virtually recaps the awkward flirtation rituals at the beginning of  Cassavetes’ first feature, Shadows, with comparably disastrous results. On balance, it could even be argued that the strongest as well as the most dubious sequences of Husbands are those in which women figure — as victims, antagonists, or lovers. 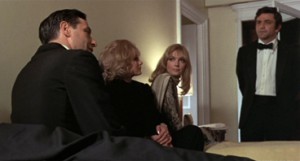 Cassavetes barely knew Falk and Gazzara when he cast them as costars, but over the course of the shooting they became two of his closest friends and most treasured future collaborators. 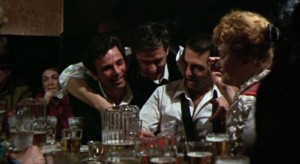