Adapting a beautiful novel by Russell Banks, Atom Egoyan (Exotica) may finally have bitten off a little more than he can chew, but the power and reach of this undertaking are still formidable. At the tragic center of the story are the deaths of many children in a small town when a school bus spins out of control and sinks into a frozen lake (depicted in an extraordinary single shot that calls to mind a Brueghel landscape) and what this threatens to do to the community, especially after a big-city lawyer (a miscast, albeit effective, Ian Holm) turns up and tries to initiate litigation. Egoyan restructures Banks’s novel (which is narrated by several characters in turn and proceeds chronologically) into the kind of mosaic narrative used in his recent features and in most of Kurt Vonnegut Jr.’s novels (in which several different time frames and narrative lines are intercut and proceed simultaneously). He also adds some material about the Pied Piper, capturing the essence of some parts of the book but simplifying most of the characters and making the mountainous setting more mythical. Virtually all of Egoyan’s features revolve around emotional traumas, but this one seems less obsessive — for good and ill. Ever since Calendar, Egoyan has grown in stature by confronting the real world rather than phantasmic allegories, making the pain less narcissistic and more explicitly concerned with the way we live together. The Sweet Hereafter is no exception, and this film has potent things to say about communal ties and the repressive machinations of capitalism that can sever them. Fine Arts. –Jonathan Rosenbaum 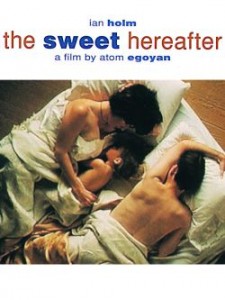