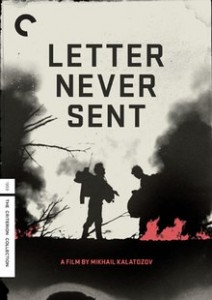 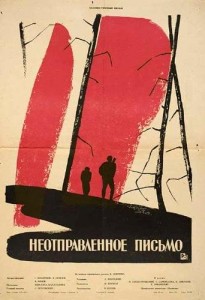 Two years after his internationally famous The Cranes Are Flying and five years before his internationally scorned I Am Cuba, Mikhail Kalatozov directed this strange 1959 adventure story about four geologists (three men and one woman) hunting for diamonds in Siberia. The title letter is being written by the narrator to his wife in Moscow, and while the explorers eventually find their treasure, they have to endure forest fires and snowstorms as they struggle back toward civilization. Though shot on location and reportedly based on a true story, the film is distanced considerably from realism, at least in any conventional sense, by its exciting and volatile camera style and its metaphysical atmosphere (sparked in particular by one line of dialogue, Nature is taking revenge); they’re less delirious than in I Am Cuba but sufficiently ravishing to have brought charges of formalism against the filmmakers. Pictorially, the double exposures and silhouette effects recall some of the glories of silent cinema. in Russian with subtitles. 98 min. (JR) 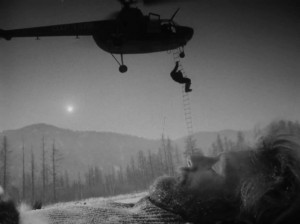