This was probably my first review of a James Cameron film, published in the August 11, 1989 issue of the Chicago Reader. It’s a review that helps to explain, in any case, some of the reasons why I dislike Avatar. — J.R. 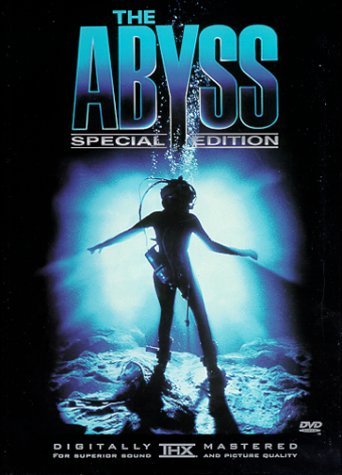 To satisfy these new cravings of human vanity, the arts have recourse to every species of imposture; and these devices sometimes go so far as to defeat their own purpose. Imitation diamonds are now made which may be easily mistaken for real ones; as soon as the art of fabricating false diamonds shall become so perfect that they cannot be distinguished from real ones, it is probable that both will be abandoned, and become mere pebbles again. — Alexis de Tocqueville, Democracy in America (1835)

I happened to see The Abyss with someone who only sees about three Hollywood movies a year. In a way it proved to be an appropriate choice for him, because it’s a veritable survey of big-budget Hollywood filmmaking in the 80s, as cannily up-to-date as the latest issue of Variety. In this case “up-to-date” means a replay of box-office hits of the past 30 or 40 years, which only goes to show how well traveled a terrain the supposedly brand-new has become.

I’m not forgetting that about 40 percent of the movie was shot underwater and that it’s full of state-of-the-art effects. To be sure, some of its technical achievements are rather specialized: the publicity materials boast that The Abyss is “the first motion picture to record scripted dialogue onto tape during underwater filming,” a “first” that reminds me of the invention by one of the Three Stooges of the first ballpoint pen to write under whipped cream. Many of the visual and aural effects of the film, set almost exclusively underwater, do look and sound quite fresh. State-of-the-art clichés, however, are still clichés, and this movie kicks around more than a few of them.

On the basis of James Cameron’s previous features, one could call him a professional recycler, and one of the most cunning in the business. Cameron’s The Terminator (1984) owed a great deal to The Road Warrior (1981) and Blade Runner (1982), while his Aliens (1986), which borrowed from First Blood (1982), was the literal sequel of Alien (1979); his only other “major” writing credit is as cowriter on another sequel, Rambo: First Blood Part Two (1985). (I haven’t seen Cameron’s unsung first feature, made in 1981, but that was a sequel, too — Piranha II: The Spawning.)

To be fair, The Terminator and Aliens weren’t simply copycat remakes but sleekly designed high-tech artifacts hammered out of tried-and-true ingredients, and their singularity lay not in the raw materials but in the ways that Cameron hammered them all together. They won their audiences through fancy special effects, streamlined story telling, expertly executed slam-bang action, and a sharp selection of contemporary ideological touchstones: in The Terminator, it’s the desire to be a machine (and the notion that Arnold Schwarzenegger is the machine that everyone wants to be), and in Aliens, various ideas about motherhood. (Perhaps Cameron’s most brilliant insight into the zeitgeist figures in The Terminator‘s clever time-travel plot, which paradoxically views the inevitability of an imminent nuclear holocaust as the prerequisite for the happy ending — a form of gloomy uplift that anticipates the depressive euphoria of Batman.) 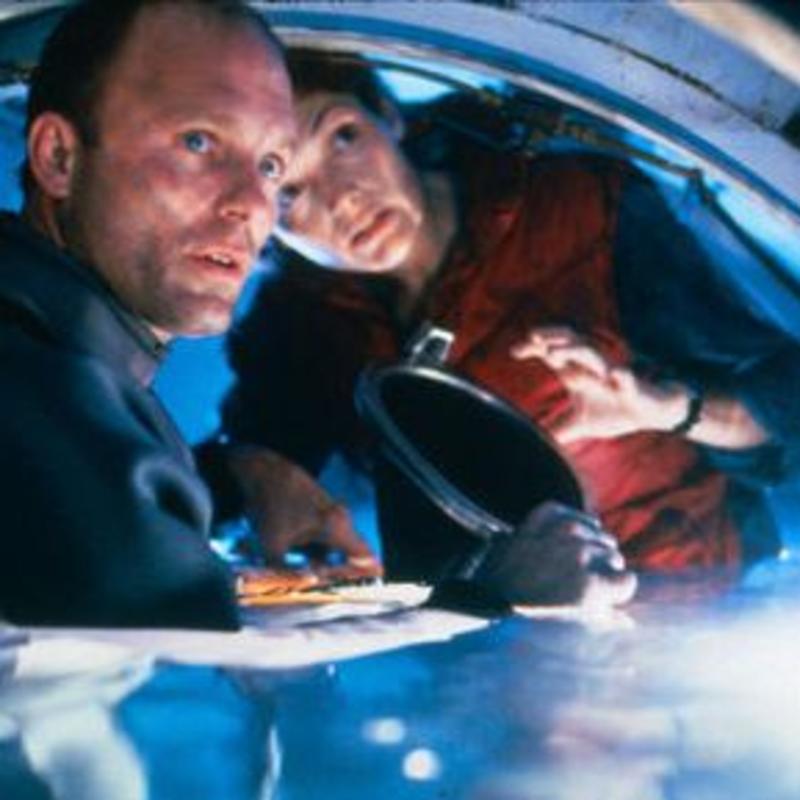 qThe Abyss displays the same virtues as its predecessors. The ideological touchstones this time around are a couple of basic polarities — cold war versus detente (in terms of attitudes rather than actual events) and bossy femininity versus nurturing motherhood — and Cameron manages to juggle and dovetail these two oppositions until they almost begin to seem like two aspects of the same conflict. But here Cameron clones and combines elements from not merely one or two other blockbuster hits, but a whole slew of them, including Alien (again), The Ten Commandments, 2001: A Space Odyssey, Star Wars, Close Encounters of the Third Kind, the Rambo films, E.T., and several Disney features.

Cameron’s wholesale plunder winds up yielding not one movie but several of them crammed together. It’s a strategy that eventually winds up backfiring; in terms of action and story telling the movie is superior to Indiana Jones and the Last Crusade and Batman, but it gradually loses momentum and conviction in its final stretches. By the end you may be wondering whether the drive to imitate that currently dominates Hollywood may be finally reaching its limits through the law of diminishing returns — a process of devaluation comparable to that outlined by de Tocqueville whereby diamonds are eventually reduced to pebbles.

How this happens can be charted easily enough through the development of the plot, which begins like a cold-war submarine thriller and ends like a science fiction Disney/Spielberg remake of the New Testament, with a love story sandwiched in between. The love story is integrated with the action elements in a number of ingenious ways: the hero’s wedding ring, for instance, which he throws into a chemical toilet in a moment of rage and then retrieves, later prevents him from losing his finger when a hatch slams shut on his hand. And there are certain ways in which Cameron manages to combine both the action and love-story elements with his “religious” theme: the heroine and hero both undergo protracted deaths and resurrections that strengthen their bond; the first of these occurrences is the most successful and suspenseful sequence in the picture.

But the strain of straddling these combos ultimately sends the movie flying off in all directions thematically, and by the final shot, the cold-war thriller has become a distant memory while the religious SF theme has been relegated to the status of purring background music — almost as if God and his heavenly angels have been reduced to a cheering section of cute, furry animals. Just as the movie makes much of the limited forms of communication that can exist between separate underwater vessels, it attempts to capitalize on the various relays that can be set up between separate and autonomous genres; but beyond a certain point, both forms of disassociation lead to delirious incoherence. 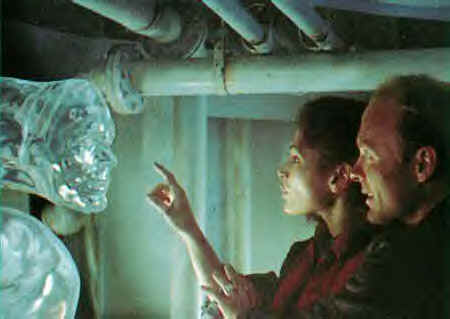 Readers who’d rather not know more about the plot are advised to skip the next four paragraphs.

A team of nine underwater oil scouts headed by Bud Brigman (Ed Harris) is sent by the U.S. Navy to the Caribbean after the U.S.S. Montana, a nuclear submarine, has become incapacitated on the craggy edge of the Cayman trough — a drop of over two and a half miles below the ocean floor. Brigman feels that he and his crew are unqualified to carry out the assignment, but he is given no choice in the matter, and the tensions on his vessel (called Deepcore) are intensified by the arrival of his estranged wife Lindsay (Mary Elizabeth Mastrantonio). Lindsay, the brusque and brittle designer of Deepcore, understands its operations better than anyone else, but she is known to Brig and his crew as “the queen bitch of the universe.” Also joining the mission is a four-man team of Navy SEALs headed by Lieutenant Coffey (Michael Biehn), an excitable cold warrior who becomes convinced early on that Soviets are responsible for the Montana’s accident, which occurred about 80 miles off the coast of Cuba; Coffey later emerges as a borderline psycho itching for war.

When Deepcore reaches the Montana, the crew find no survivors. A member of Bud’s team (John Bedford Lloyd) who’s left alone briefly on the Montana sees a mysterious light approach him, and then goes into a coma brought about by too much oxygen; from a nearby submersible (a smaller vessel resembling the space pods in 2001), Lindsay glimpses the same magical light. Meanwhile, a hurricane cuts off all communication between the carrier on the water’s surface and Deepcore, and the resulting turbulence causes Deepcore to crash into the Cayman trough. While making repairs outside the vessel, Lindsay has an encounter with the alien or aliens that projected the mysterious light, but Bud refuses to believe her. They also discover that Coffey has nuclear missiles on Deepcore and is ready to use them, which splits the crew into warring camps.

The alien force enters Deepcore in the form of a large, shimmering, watery snake that changes shape at will and quickly befriends Lindsay and Bud and his crew by replicating the shapes of their faces and their facial expressions (suggesting some of the mimetic patterns established in E.T.). Coffey responds by slamming a hatch and slicing the creature in two, which leads Lindsay to quip, “So raise your hand if you think it was a Russian water tentacle.” After a violent skirmish between Bud and Coffey and a subsequent chase in submersibles (lots of Rambo and Star Wars here), the two vessels collide; Coffey perishes, a nuclear warhead that he’s carrying sinks to the ocean floor, and the submersible carrying Bud and Lindsay starts to flood. Because the couple have only one diving suit between them, Lindsay insists that Bud let her drown, drag her body back to Deepcore, and attempt to revive her there — a plan that eventually succeeds, after much grief and hysteria.

Then Bud has to descend to the ocean floor to dismantle the warhead. He runs out of oxygen, but is eventually saved by the alien force, which now takes the form of a giant Disney butterfly, with a face that makes it a first cousin to the aliens in Close Encounters. It carries Bud to an underwater alien city (shades of Tron and Tinker Bell) where he is able to breathe again. (This is where De Mille comes in: a pocket of air is created for Bud, flanked by rushing water on both sides, reproducing the parting of the Red Sea in The Ten Commandments.) Finally the whole alien city rises to the ocean’s surface, lifting the carrier and Deepcore with it, and Bud and Lindsay are reunited.

Earlier, I suggested that two oppositions set up by the movie — cold war versus detente and bossy femininity versus nurturing motherhood — were made to seem almost identical by the end. This is largely brought about through the maternal nature of the alien force and the film’s association of this with both the softer side of Lindsay and the peaceful aspects of detente, all three of which develop concurrently in the plot. The reproductive aspect of womanhood neatly ties in with the capacity of the aliens (and of Cameron) to replicate whatever is in front of them, while the nurturing aspect is what supposedly elevates Lindsay into something more suitable for Bud than “the queen bitch of the universe” (i.e., an uppity woman), and what elevates the aliens into something more suited for the guidance of mankind than cold-war villains (i.e., a Russian water tentacle).

This still doesn’t explain, however, why the aliens don’t serve an equally nurturing role for the Montana or Coffey, or why the exclusive importance of mankind’s encounter with a superior alien intelligence is that it brings about a clincher between Bud and Lindsay (with Christian overtones as they both apparently stand on water, not to mention the heavenly choir that celebrates their kiss). For the answers to these questions and others, we’ll obviously have to wait for the sequel. In the meantime, we can ponder the quote from Nietzsche in the press kit — “When you look long into an abyss, the abyss also looks into you” — which implies that narcissism is what’s at the root of all this compulsive replication. 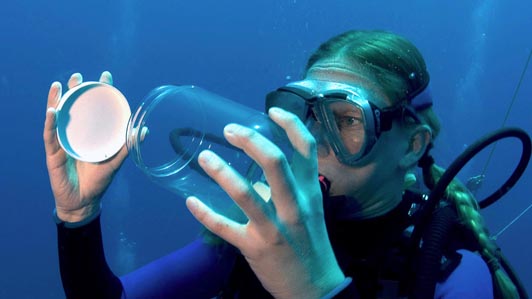