From Monthly Film Bulletin, July 1976 (Vol. 43, No. 510). I’ve made a couple of corrections and added several basic credits, visible now at the end of my VHS copy but not accessible to me back in 1976. (I should add that the pitches made by the coproducer to potential sponsors aren’t on the VHS version.) Thanks to Ehsan Khoshbakht for some help with the illustrations.–- J.R. 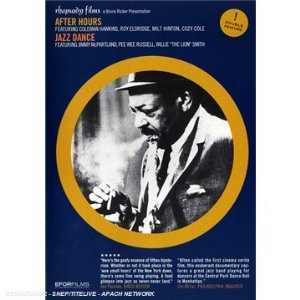 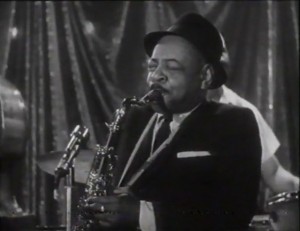 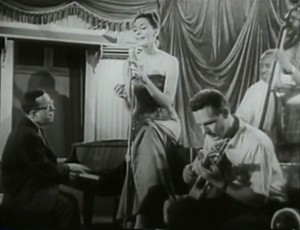 A TV pilot which failed to attract sponsors, After Hours carries all the poignance of a noble lost cause. Despite a certain self-consciousness in presentation, which clearly aims at winning over a recalcitrant audience, some of the best jazz ever recorded on film is available here. After an opening montage devoted to Manhattan jazz clubs accompanied by the narrator’s patter (“This is my beat — the jazz beat”), one is introduced to the ‘cigarette girl’ and ‘doorman’ at the “After Hours Club”, complete with fictional glosses (the girl is an “aspiring actress”). But as soon as Coleman Hawkins enters, joins the rhythm section on the bandstand and Iaunches into a gorgeous version of “Lover Man”,the film properly gets down to business. Then, over Johnny Guarnieri’s piano, producer Shepherd Trout delivers a pitch to the show’s potential sponsors — an intrusion which recurs on two later occasions — before the band goes into “Sunday”, sparked by the sudden entrance of Roy Eldridge, whose fine solo is partially overlaid with gratuitous twaddle (“Ray’s driving, biting, swinging playing is making the temperature rise a bit here”), and the ‘doorman’ and ‘cigarette girl’ dance. On “Taking a Chance on Love”, Eldridge carries the melody while Hawkins weaves a lovely embroidery round it; then, after a delicate Guarnieri solo, a Chris Connor-like vocalist named Carol Stevens turns up and sings the same tune more slowly before moving back to up-tempo for some fair-to-middling scatting. The climactic number is “Just You, Just Me”, which starts off with scat exchanges between Stevens and an ebullient Eldridge and proceeds into a wonderful Hawkins solo. Shortly before Eldridge’s trumpet takes over and the actorish spectators break into some lively dancing, there is a paralyzing moment when Hawkins unexpectedly spills over into a second chorus, visibly provoking perplexity and then amusement in Eldridge — a beautiful example of unforeseeable spontaneity which suddenly fulfills and overcomes all the film’s banal pronouncements, making one truly regret that the show never became a series. Whatever the embarrassments of the accompanying hard-sell, the magnificence of the music sadly suggests that if this jazz program couldn’t get off the ground, neither could any other. 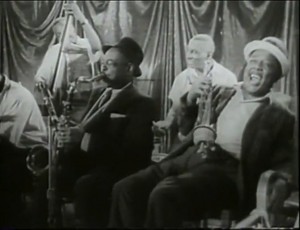