The Good, The Bad & The Ugly: WILD AT HEART

This review appeared in the Autumn 1990 issue of Sight and Sound.–- J.R. 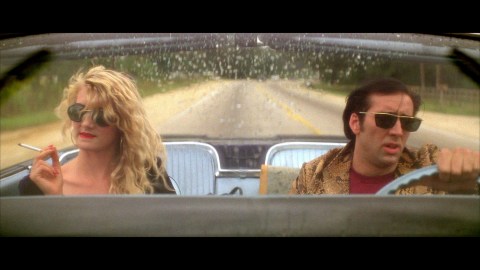 Dedicated to the memory of the late noir writer Charles Willeford, Barry Gifford’s Wild at Heart is a lovely little novel about youthful passions, dashed hopes and intricate cross-purposes in a redneck milieu. Split into 45 chapters over a mere 159 pages, it charts the cross-country flight of Sailor and Lula, a recent parolee and his girlfriend, from her hysterical mother, proceeding from the Carolinas to New Orleans to Texas in a picaresque journey that, in the tradition of the eighteenth-century novel, has plenty of room for interpolated stories. More literary in a self-conscious way than Willeford at his best (e.g., Sideswipe), it imparts a similar feeling for the vernacular poetry of despair and the way certain people live, think and speak. (‘The woman wouldn’t be fifty for two or three years yet and she acted like life forgot her address.’)

It is hard to imagine a commercial film that could respect the book’s form; and to find a commercial filmmaker who could respect its characters, milieu and feelings, one would have to look for someone like the Nicholas Ray of They Live By Night. The last person to turn to, alas, would be David Lynch, who, as it happens, discovered the novel while it was still in galleys, wrote a first-draft screenplay in six days, and, a little over a year later, won the the Palme d’Or at Cannes for his freewheeling adaptation.

As a director whose talents are essentially non-narrative and painterly –- a creator of moods, textures and uncanny dream images — Lynch started his career with Eraserhead at the peak of his powers. Yet it seems that almost every step in his subsequent dilution of that talent has been greeted with a rise in critical praise and audience response — perhaps because his genuine flair for producing disquiet seems more subversive to many as it inches its way into the mainstream.

In Eraserhead, at least, one felt he had something highly personal to impart –queasy feelings about parenthood, families, urban poverty and other forms of entrapment. But discounting The Elephant Man and Dune, where he was working as a hired gun, his present reputation chiefly stems from Blue Velvet (where he managed to push all the right Hitchcock buttons) and Twin Peaks (where he smuggled his eccentric style into primetime soap opera). Both works are predicated on the puritanical notion that the world is full of dirty secrets and ineffably evil intentions, countered by an Eagle Scout’s sense of the good and the innocent (embodied mainly in the Kyle Maclachlan character in both works) that never gets very far beyond the nuances of an Andy Hardy.

As watchable and unpredictable as these works often are, they seem held together by a form of camp irony — a kind of facetiousness about wholesome images of the American Dream — that threatens to unhinge their premises at every turn, creating a kind of suspense which seems more tenable in mysteries and serials than in less open-ended forms, such as love stories.

Wild at Heart (Palace), a love story, has a half-hearted mystery of sorts, not present in the novel, about what Sailor (Nicolas Cage) did or didn’t see when the father of Lula (Laura Dern) perished in a fire, apparently after dousing himself in kerosene and lighting a match. Why he might have killed himself is characteristically never even discussed, but we do know that Lula’s mother Marietta (Diane Ladd) — a neurotic in the novel, a raving lunatic in the film — has two boyfriends, (Harry Dean Stanton and J. E. Freeman), the latter a paid killer, and that she enlists both men to retrieve Lula and/or get rid of Sailor. We also know via flashbacks that Marietta sexually propositioned Sailor (recalling a scene in Eraserhead) shortly before he beat a black man to death, the incident that landed him in prison. 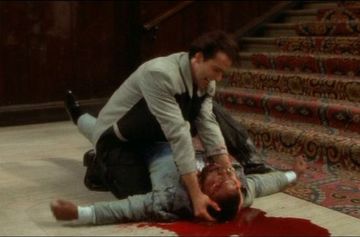 But trying to make sense of the movie’s story as a mystery, or even as a plot in any ordinary sense, is ultimately to play a fool’s game. Lynch uses Gifford’s novel (with kinky additions) chiefly as an armature and a come-on for a series of lurid imaginings, an anthology of shocks and conceits that is tied to a plot only in the sense that a boat is moored to a dock. Repeated close-ups of cigarettes being lit and recurring flashbacks to the death of Lula’s father seem designed to conjure a mystery, but at best they only suggest yet another dirty little secret that the movie never quite gets round to uncovering.

Perhaps the major problem is that despite Cage and Dern’s best efforts, Lynch is ultimately interested only in iconography, not characters at all. When it comes to images of evil, corruption, derangement, raw passion and mutilation (roughly in that order), Wild at Heart is a veritable cornucopia. Some of these are borrowed (the dog bearing a man’s hand comes from Yojimbo), while others qualify as generic creations, but none quite add up to characters. Willem Dafoe’s Bobby Peru, the most detailed of these, is outfitted with stumpy gums and a pencil moustache resembling John Waters’ — leading one to the alarming suspicion that Waters has now become an influence on Lynch, which other details, such as a display of obese porn queens, seem to corroborate. 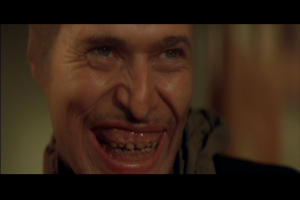 And when it comes to images of goodness and innocence, even whatever we may find likeable about Sailor and Lula is largely undermined by camp pop iconography — Elvis Presley in relation to Sailor, and The Wizard of Oz in relation to Sailor, Lula and even a stray walk-on or two (such as Jack Nance). Both these references come together in an elaborate mock happy ending, light years away from anything in Gifford, which seems sadly to demonstrate only the desperation of a surrealist vaudevillian stuck for a finish.