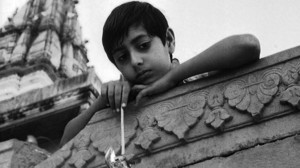 The second installment of Satyajit Ray’s great Apu trilogy, fully comprehensible on its own terms, suffers at times from its episodically constructed plot, which follows Apu from the age of ten in the holy city of Banaras (in 1920) to his early adulthood in Calcutta. It also bears the traces of technical problems, which led to a virtually one-to-one shooting ratio for many scenes. But this also happens to be my own favorite film in the trilogy, as well as the reported favorite of Ray’s fellow Bengali directors Ritwik Ghatak and Mrinal Sen. Its treatment of death — specifically the death of Apu’s father toward the beginning of the film and of his mother near the end — is among the most beautiful, mystical, and precise handlings of that subject in all of cinema, worthy of Mizoguchi; in a way the film is little more than a careful contextualizing of these two astonishing sequences. An adaptation of roughly the last fifth of Bibhutibhusan Banerjee’s novel Pather Panchali and the first third of his subsequent novel Aparajita, this benefits as much as the rest of the trilogy from the ravishing “commentary” of Ravi Shankar’s music. It’s a masterpiece for which terms like “simplicity” and “profundity” seem inadequate. With Pinaki Sen Gupta, Smaran Ghosal, Kanu Banerjee, and Karuna Banerjee. Music Box, Friday through Thursday, August 25 through 31. 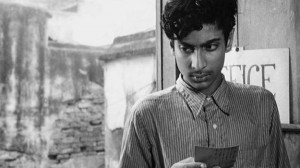