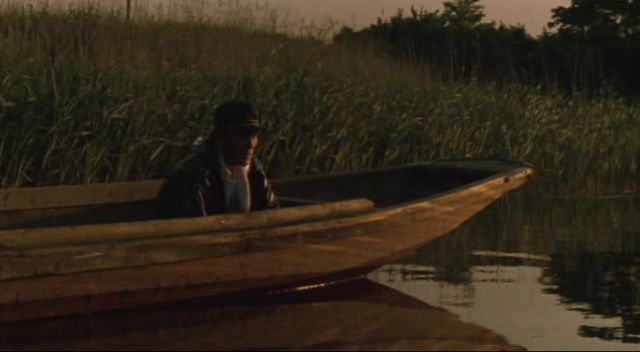 It’s been a truism for quite some time that the Japanese cinema is in terrible shape, financially and aesthetically (particularly now that Akira Kurosawa has died) — though it’s not clear to what extent one should believe the overseas commentators who sift through the available evidence. I’ve come to mistrust American critics who dismiss the output of a national cinema on the basis of the two or three examples they see per year, especially when I see other examples at European film festivals that undermine their conclusions. But 15 years ago Dave Kehr wrote the best English-language account of Imamura that I know, and he began by noting, “The Japanese cinema still exists…though just barely. The impact of television has reduced an annual audience set at 1 billion in 1960 to 150 million in 1980; of the 350 now [1983] made each year, the Japanese critic Tadao Sato estimates that 200 are pornographic. Many of the New Wave directors of the 50s and 60s have given up in frustration.” And Imamura, who’s been making films for the past 40 years, apparently has a lot of trouble getting his projects bankrolled.

At the Locarno film festival last month, a Japanese member of the jury — Shiguehiko Hasumi, president of the University of Tokyo and author of a superb study of Yasujiro Ozu that has just been published in French — noted that Western interest in Japanese cinema is dependent mainly on Western notions of exoticism (as if to prove his point, the relatively unexotic Japanese feature showing in the Locarno competition, a sort of black comedy produced by Takeshi Kitano, seemed to draw fewer spectators than any other entry). However, it might be argued that a Western tradition like ballroom dancing is central to the Western success of Shall We Dance?, its exoticism at least partially dependent on the use of familiar elements. Some French critics have plausibly compared Imamura’s depiction in The Eel of a small, closely knit community with the juicy, interactive characterizations of John Ford’s Wagon Master, The Sun Shines Bright, and The Quiet Man — which suggests that what’s appealing about The Eel isn’t so much what it’s saying about Japan but what it’s saying about people in general. And what it’s saying is just about as funny as anything in Judge Priest or Donovan’s Reef, to cite a couple of other appropriate Fordian cross-references.

“Imamura takes his characters seriously but makes fun of their behavior,” Yann Tobin wrote in Positif last year, which strikes me as an excellent one-line summary of the way Ford works as well. A good early example of this comic approach comes when we first see The Eel‘s hero, just released after eight years in prison, marching and panting like a soldier as he and a Buddhist priest go for a casual walk, then running mechanically after a jogging team that passes them — the conditioned reflex of a man who’s spent too much time sprinting across prison yards.

In the summer of 1988 Takuro Yamashita (Koji Yakusho, also the lead in Shall We Dance?), a white-collar worker at a large flour company, reads an anonymous letter on the train home informing him that his wife has been committing adultery, particularly when he goes on overnight fishing trips, and that her lover drives a white sedan. He says nothing about this to his wife, leaves on a fishing trip, then returns home early and sees a white sedan parked outside. After spying his wife in the act through a window, he grabs a butcher’s knife from a shed, enters the house, and stabs her lover to death. After a pause, he stabs her to death too. Then he rides his bike to the local police station and confesses. 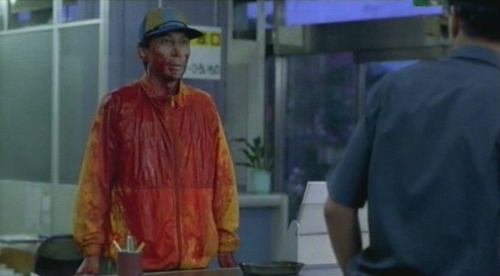 Eight years later he’s released from prison on a two-year parole under the supervision of a Buddhist priest, carrying in a plastic bag a pet eel the prison authorities have allowed him to keep; he addresses it like a friend, explaining, “He listens to me.” Having learned to be a barber in prison, he sets up a riverside shop a few miles from the priest’s temple and continues his solitary existence, keeping the eel in an aquarium and regarding it as his only companion.

One day while fishing, Takuro happens upon an unconscious young woman who resembles his late wife; Keiki (Misa Shimizu) has attempted suicide by swallowing pills. With the help of some neighbors, he rushes her to the hospital. After she recovers and is released, she persuades him to hire her as his assistant; yet as a bond grows between them, he remains aloof. The plot thickens when two people turn up in this remote neck of the woods — a former prison mate who threatens to expose Takuro’s past and a former lover who claims Keiki stole money from him. 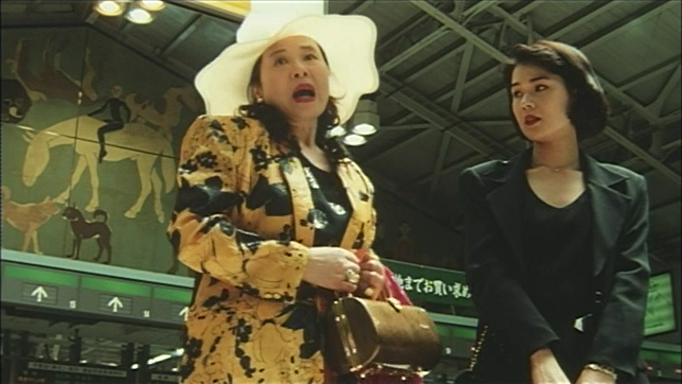 The problem with recounting even part of the plot is that it reveals practically nothing of the film’s overall feel and quirky texture. If the movie’s main subject is Takuro’s gradual regeneration as a romantic and social being, its style is attentive mainly to internal and external factors that lie far beyond this synopsis. The internal factors are subjective flashbacks and dream sequences that periodically tell us things about Takuro’s consciousness. Sometimes they’re as brief as single shots or remembered (or imagined) lines of dialogue, and sometimes they’re longer or more elaborate; but all of them are accorded the same status as the objective facts of Takuro’s life — or at least Imamura treats them more as objective events than as bracketed interludes.

The external factors are mainly environmental — the settings and people of Takuro’s life and, later on, Keiki’s life. This is where the juicy Fordian characterizations come in — as well as most of the comedy. One of Takuro’s neighbors is an unemployed young man supported by his parents whose main activity is building an outdoor site designed to attract the attention of extraterrestrials; Takuro periodically lends him his barber’s pole to serve as a prop in this surreal construction. Another neighbor is a fisherman who accompanies Takuro on nighttime fishing expeditions and who fashions a tube designed to catch eels without hurting them. The former prison mate is a loutish drunk, and Keiki’s mother is a madwoman who sees herself as a flamenco dancer and as Carmen in Bizet’s opera — though what she has to do with the remainder of the movie is anybody’s guess. 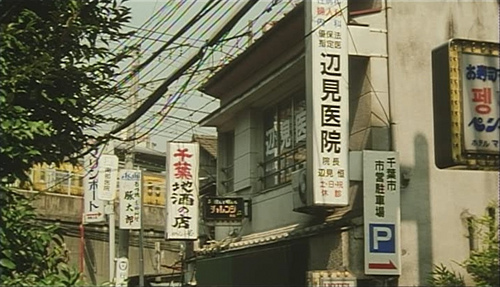 “If my films are messy,” Imamura has said, “this is probably due to the fact that I don’t like too perfect a cinema.” He has also said, “I love all the characters in my films, even the loutish and frivolous ones. I want every one of my shots to express this love.” These traits lead to occasional sloppiness when it comes to storytelling. A onetime assistant to Yasujiro Ozu, Imamura developed his style largely in opposition to the formal neatness of this master — in fact, he positively wallows in unruliness. For instance, Takuro’s former prison mate accuses him in one scene of having invented or hallucinated the anonymous letter that informed him of his wife’s infidelity, arguing that his feelings of inadequacy as a lover combined with his jealousy were the pretext. Even though we see the letter and hear a woman’s voice reciting its contents while Takuro reads it, the question of who wrote it is neither posed nor resolved. In one of his interviews Imamura — noting that some Japanese spectators were bothered by this omission — said that the novel the film is adapted from, Akira Yoshimura’s Sparkles in the Darkness, doesn’t answer the question either; Imamura and his cowriters decided that the letter writer was the younger sister of the lover of Takuro’s wife, but they didn’t bother to mention this in the script. A comparable anomaly lies in the countless allusions made in the dialogue to Takuro killing his wife, though none are made to him killing her lover. Peculiarities of this kind tend to raise questions in the minds of Western viewers about whether they’re missing something because of nuances in Japanese culture they don’t understand, so it’s useful to know that in at least one instance Japanese viewers have been equally puzzled. 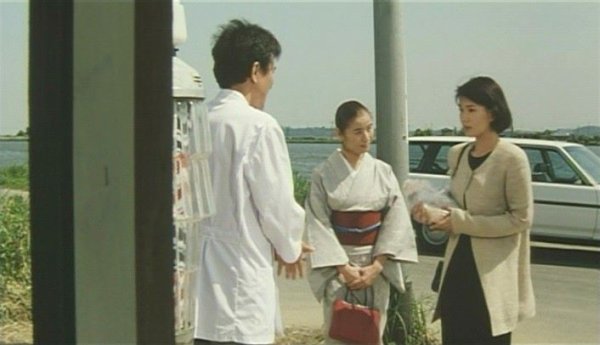 And what about the eel? Is it a symbol of something specific in Japanese culture? I don’t know, but I can’t see how it matters much. I’d rather view the creature as the film’s ultimate embodiment of the linear, which most of the remainder is strategically designed to subvert. Imamura takes great pains to recount the mating and migrating habits of eels and then virtually repeats the speech, which is obviously relevant to Takuro’s story. Eels turn up a lot in the dream sequences, and there’s even one splendid, eerie moment when Takuro and his pet are superimposed in a visionary shot. There’s also a climactic moment when the aquarium is smashed in the midst of a comic-horrific slugfest involving at least half of the characters in the movie — a hyperbolic free-for-all that implies that most of the major elements in Japanese society have magically yet logically converged on this barbershop in the sticks. 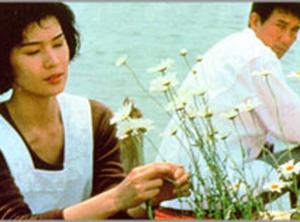