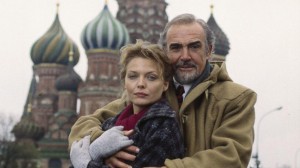 Glasnost or no glasnost, the cold war still rages here for CIA officials, who manage to ensnare a British publisher and jazz musician (Sean Connery) in a plot to intercept a book by a distinguished Soviet scientist (Klaus Maria Brandauer); the scientist has spilled the beans about the Soviet defense program, and his book editor (Michelle Pfeiffer) becomes an unwitting pawn in the spy network. Part of what makes this a top-notch thriller (as well as a touching love story) is the literacy and intelligence of the dialogue, adapted by playwright Tom Stoppard from John Le Carre’s novel; another part is the taut professionalism of director Fred Schepisi, who knows precisely when to cut away to eavesdropping spies or fleeting flashbacks in order to add flavor or tension. But the film has many other virtues as well: the most thoroughgoing and effective use of Moscow and Leningrad locations ever in an American film, a good score by Jerry Goldsmith (with Branford Marsalis dubbing Connery’s soprano sax solos), first-rate performances from the leads (Pfeiffer is especially fine), and a well-trained secondary cast including Roy Scheider, James Fox, John Mahoney, Michael Kitchen, J.T. Walsh, David Threlfall, and in an unexpected appearance film director Ken Russell. Apart from a certain implausibility in the film’s initial premise, this is a first-rate entertainment that captures Le Carre’s jaundiced if morally sensitive vision with a great deal of care and feeling (1990). (JR)