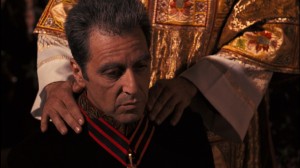 Francis Coppola’s tragic and worthy (if uneven) conclusion to his Godfather trilogy, which he wrote in collaboration with Mario Puzo, represents a certain moral improvement over its predecessors by refusing to celebrate and condemn violence and duplicity in the same breath, or at least to the same degree. For 161 minutes, Michael Corleone (Al Pacino at his best) seeks absolution for his past sins, and although a cardinal grants it at one point (in a powerful confession scene), the film itself refuses to. While some of the allegorical implications persist (crime equals capitalism, Mafia equals family, both equal America), the decline of America in a world market where both European money and the Vatican are made to seem as corrupt as the Corleones leads to an overall change of focus; it ultimately lands this film in a metaphysical realm where the very plot seems formalized into semiabstract rituals. The inflated sense of self-importance in part two — epitomized by the playing of Nino Rota’s ubiquitous waltz theme on a church organ during a communion — is somewhat muted here, although a virtuoso set-piece climax finally strains credulity when too many important events dovetail in a single sequence. Most of the limited love interest here exists between Michael’s daughter (Sofia Coppola) and his illegitimate hoodlum nephew (Andy Garcia), and in spite of the commercial and dramatic losses entailed by Sofia Coppola’s lack of glamor and acting experience, her capacity to suggest a real person rather than a star scales this movie down to agreeable proportions. The episodic construction yields a strong first and third act and a sagging middle, and one regrets the absence of Robert Duvall, whose character provided a crucial link between crime and business in the first two parts. But this is a provocative and stirring climax to the Corleone saga, as well as an autonomous work that often shows Coppola at his near best. With Diane Keaton, Talia Shire, Joe Mantegna, Eli Wallach, Bridget Fonda, and George Hamilton. (Starts Tuesday, December 25, Biograph, Burnham Plaza, Lincoln Village, Water Tower, Hyde Park, Norridge, Old Orchard)