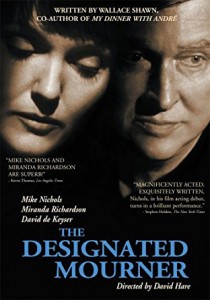 Another whimper from playwright Wallace Shawn about the fall of civilization — seen, as usual, more in terms of class than of intellect or aesthetics. References to such touchstones as John Donne and croquet contrive to suggest that maybe a little more than the takeover of the New Yorker by Tina Brown is at stake, but maybe not; the triumph of lowbrow vulgarity is perceived as the ultimate demise of mankind. Director David Hare films the play in its basic stage setting, three characters seated at a table, and trusts the pampered anguish of the material — the bemused and guilt-ridden but unquenchable sense of entitlement — to speak paradoxically for all of us. Mike Nichols, in his first screen performance, does a compelling job in the title role, his wide range of cartoon impersonations running the gamut from matinee-idol tics to scowls and nasal whines that evoke Shawn himself. Much flatter turns by Miranda Richardson and David de Keyser succeed only in flaunting the self-absorbed limitations of the play’s vision. If this is the way the world ends, I think I’d rather see it out with Schwarzenegger or Jim Carrey — anything but this dull pomposity. (JR) 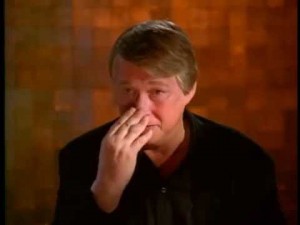