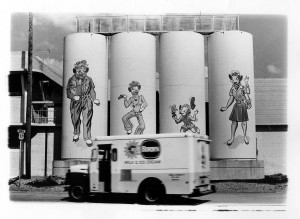 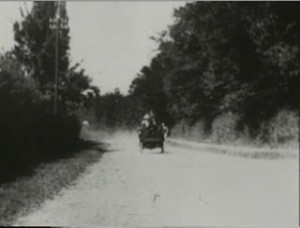 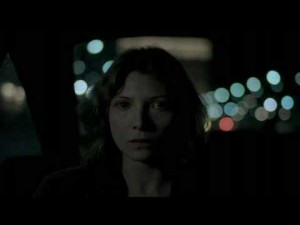 Last year the topic was “The Cinematic’ Apparatus: Technology as Historical and Ideological Form,” and the main attraction was papers by and discussions with many of the reputed superstars of film theory, ranging from Jean-Louis Comolli and Christian Metz [see below] to Stephen Heath and Laura Mulvey. This year the title was “Cinema and Language,” and although there was a lot of both to be squeezed into four days, it was the movies shown that left the strongest impression. 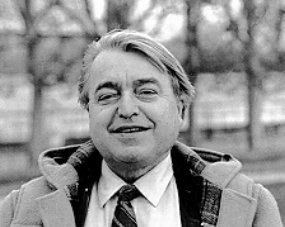 In fairness to some of the papers read, this could be a matter of procedures and dynamics as well as talents. Assimilating several ambitious papers in a row is no easy matter; and considering that many such studies are meant to be read, not heard, one can often feel that their vocalized versions are little more than previews. (Now that Macmillan is planning to publish an annual volume devoted to the conference — beginning with last year’s, which is due to appear this fall — this tendency will surely increase.)

“Why shouldn’t I ask for the impossible?” “Cinema isn’t made to grab ahold of reality, but to grab ahold of cinema.” “In [the films of Marguerite] Duras, the more you see, the less you know.” “Cinema is the institution of perversion.” This random catch of remarks, all heard during the second morning at Milwaukee amid longer and more difficult phrases, may give a rough sense of the sort of ideas bandied about. The remarks also underscore a lot of other things said at the conference. For example, one filmmaker’s skepticism about reality summoned up from another participant a striking formulation of French psychoanalytic theory: The “real equals the impossibility of coming into any fullness of identity” — the sort of daft intuition that can theoretically keep one busy for days.

While last year’s conference was criticized as “elitist” for limiting its number of participants to seventy-five, this year’s updated model, attended by twice as many people, seemed much less oriented toward any community interests. In the final session, where filmmakers and theorists confronted one another over three hours of discussion, they seemed most often to be at each other’s throats.

One might have thought that the mediating figure of the critic would have been helpful here. But the previous night, when Chicago critic B. Ruby Rich read a sprightly and helpful introduction to Chantal Akerman’s Les rendez-vous d’Anna (Meetings of Anna), some members of the audience — including Akerman herself — prevented her from finishing it. In theory, there may have been some collective desire to pool theoretical, critical, and practical resources. But when it came down to hard cases, all three voices tended to compete for the spotlight.

These problems apart, it was interesting to note some progressions in the methods of film analysis as a result of a sharpened understanding of film history. At a lively session devoted to Japanese film, two papers dealt explicitly with movies of the thirties that are only beginning to be examined in detail by scholars.

David Bordwell began by attempting to recast André Bazin’s celebrated essay “The Evolution of the Language of Cinema” in relation to certain practices of Ozu and Mizoguchi during that decade. Noël Burch — author of a new book on Japanese cinema -– responded coolly by saying that he considered Bazin’ s categories “discredited.” Bazin was “fundamentally wrong” about early films to begin with, Burch argued, and anyway, it was no longer permissible to speak of an “evolution of world cinema. ” 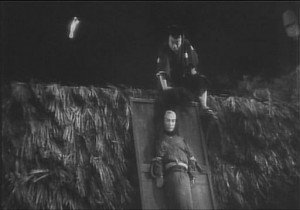 Don Kirihara, a Japanese student of Bordwell’s at the University of Wisconsin’s Madison campus, followed with a stimulating paper about the uses of Kabuki in Mizoguchi’s 1939 Tale of Late Chrysanthemums. A film set in the 1880s that lasts 150 minutes and contains only 144 shots, it curiously resorts to the more rapid editing style of Hollywood only when Kabuki performances are featured. This led to remarks from Annette Michelson about Eisenstein’s responses to Kabuki in Moscow in l928 – particularly his interest in the way this theatrical form contains its own built-in analysis.

The other workshops — on image and sound, narrative and signification, and the triple threat language-production-ideology — were unfortunately less focused, making most of the individual insights more diffuse and scattered. At the same time, despite the title of the conference, semiology and linguistics put in minimal appearances this year. This reflects a continuing shift of emphasis toward feminism, psychoanalysis, history, and ideology and away from the study of signs and language that some theorists were tinkering with a few years ago. 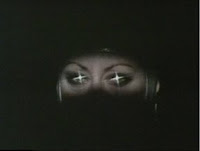 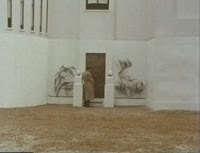 Noël Burch is an American-born French citizen who resembles a bearded Elisha Cook, Jr., and speaks with an upper-class English accent. He is equally hard to classify as a filmmaker. At the end of the conference, he presented the world premiere of Correction, Please, or How We Got Into Pictures — a remarkable meditation on primitive cinema. Working with actual footage shot at the start of this century as well as newly made pastiches filmed in color, this comic featurette offers a much more graceful and persuasive version of Burch’s theories than can be found in his prose. 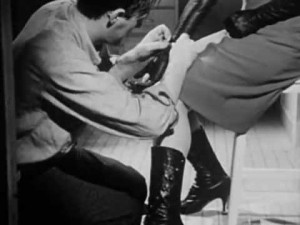 Playing diverse tricks with editing and perspective, Burch’s film also leaps ahead to the early twenties to restage a sequence from Fritz Lang’s first Dr. Mabuse thriller. Ideal as an educational tool, this intriguing analysis of the freedom and density of early films deserves to be widely seen.

In contrast to Burch’s exploration of the “avant-garde” aspects of early popular cinema, the controversial and accomplished new films of James Benning and Chantal Akerman were bent on pursuing a reverse project — turning the recent avant-garde into something popular and accessible. In a specialized context like Milwaukee, where the worst possible epithet for anything is “recuperative,” this goal was naturally regarded with some ambivalence. Conversely, both filmmakers were clearly less than happy with the theoretical tenor of the discussions. 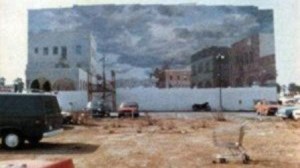 Benning’s Grand Opera: An Historical Romance, shown to an audibly appreciative audience, could conceivably go down in history as the first entirely non-threatening nonnarrative film in the American avant-garde. Warm, loose, and expansive, in the manner of a Whitman or a Kerouac, this good-natured bundle of sketches — inspired by the blowing up of Oklahoma City’s Biltmore Hotel — is a grandiloquent kitchen sink film, like Louis Hock’s Pacific Time, with a little bit of everything thrown in.

Executing 360-degree pans across the façades of various houses he’s lived in, or re-editing ten shots from his last feature (One Way Boogie Woogie), Benning reaffirms his Hopperesque feeling for desolate landscapes and his melodramatic flair for pacing and punctuating his shots with offscreen sounds and narrative fragments. Bristling with as many self-referential gags as the average Bob Hope and Bing Crosby “Road” comedy, Grand Opera even solicits the physical presences or voices of other avant-garde filmmakers — Stan Brakhage, Hollis Frampton, Jean-Pierre Gorin, George Landow, Yvonne Rainer, and Michael Snow –- for extended tributes and asides.

Some of this, to be sure, has already been done — to brilliant parodic effect — in Landow’s own Wide Angle Saxon. But if a lot of Grand Opera looks like déjà vu, this is part of the sloppy, semi-likable point of it. Without succumbing to a single dull moment in ninety minutes, it so thoroughly eliminates any spirit of threat or challenge from the avant-garde tradition it invokes that one could safely consign most of its nostalgic pleasures to a dentist’s waiting room. 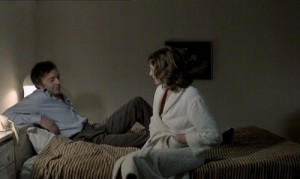 If Benning’s accounts of his American travels seem to take the avant-garde about as far as it can go toward everyday familiarity, Akerman’s Les rendez-vous d’Anna — about the travels of a woman (Aurore Clément) through Germany, Belgium, and France – virtually bypasses the avant-garde to adopt the rather different familiarity of the 35mm European art film.

But even while it displays a striking kinship with recent German films by Wim Wenders and Peter Handke, and recalls some of the modernist practices of Bresson and Antonioni, Akerman’s fifth feature — the first, by the way, to land an American distributor — has an intimate and logical relation to her previous work. Anna, a young Belgian filmmaker (like Akerman) who lives in Paris, returns there by train from a routine trip to Germany, encountering two lovers (Helmut Griem, Jean-Pierre Cassel), her mother (Léa Massari), and a few acquaintances en route. 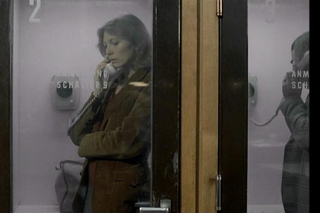 These very stylized meetings are all set within the cramped, neutral spaces of train stations and hotel rooms — antiseptic, anonymous locations that take on a startling beauty and power in Akerman’s chilly color images, shot by Jean Penzer.  Perhaps as a counterpart to Akerman’s ambivalent autobiographical relation to her heroine, the camera remains in total possession of these creepy places at the same time that Anna seems totally dislocated from them. The resulting claustrophobic strangeness of her encounters often evokes Kafka’s novels — and, beyond them, memories of the Diaspora and the legend of the Wandering Jew.

As B. Ruby Rich suggested in her introduction, Anna’s spiritual malaise might relate to the existential “nausea” of Sartre, but probably has more to do with an illness associated with Akerman’s generation: “anorexia nervosa, that favorite condition of young women without a center, the blockage of appetite, the malady that sends them back into their mother’s arms.” And in the most unusual sequence of this haunted film, a love scene between Anna and her mother, Akerman’s pessimistic view of contemporary Europe seems to admit a few rays of light.

Next to the impossibly cheerful stance of Benning’s film, Akerman’s gloom has some of the awful inevitability of a tidal wave, and one wonders how long it’ll take Woody Allen to come up with some characteristic quips about it. In the meantime, if narcissism was the provocative secret theme of the Milwaukee conference this year, this may help explain why so many of the most eloquent and commanding voices heard — in papers, discussions, and films alike — sounded like disconnected laments. To experience any strong collective emotions it was necessary to play hooky, as I did one night, and catch up with The China Syndrome. 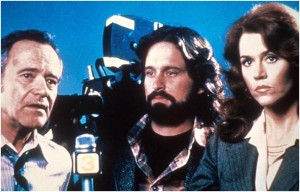