Does Choosing “The Year’s Best” Compromise the Truth?

Written for and published by Slate on December 27, 2005. The other contributors to this discussion, whom I’m addressing, are David Edelstein, Scott Fondas, and A.O. Scott. — J.R.

Holiday Greetings, David, Scott, and Tony, David, I appreciate your invitation to “shake hands and come out punching,” though I suspect our disagreements this time around may wind up having more to do with Steven Spielberg and Munich than they do with Terrence Malick and The New World. (See Edelstein’s top-20 list of 2005 films here.) Just to be contrary, however, let me start off with four agreements. Me and You and Everyone We Know, The Three Burials of Melquiades Estrada, William Eggleston and the Real World, and Homecoming all belong somewhere on my own extended list of favorites — and I’d need an asterisk of my own for the penultimate title, David, because Michael Almereyda is a friend whom we share. To be contrary in another way, I haven’t yet composed my full list for Slate — although I’ve already filed separate lists for the Chicago Reader (which will appear online on Jan. 6) and the Village Voice (which has already appeared online). With your patience and indulgence, I’d like to delay this ritual for another day or so, concentrating for the moment on the issue of what the four of us actually do for a living. Let me begin by quoting something I recently came across that for me has a lot of relevance to our positions about several current movies:

Film criticism, more than any other form of criticism except perhaps that of the novel, is a compromise. The critic, as much as the film, is supposed to entertain, and the great public is not interested in technicalities. The reader expects a series of dogmatic statements: he is satisfied … with being told what is good and what is bad. If he finds himself often enough in agreement with the critic, he is content. It never occurs to him to ask why the critic thought this film good and that film bad, any more than it occurs to him to question his own taste. The fictional film is more or less stabilized at the level of middle-class taste. One need not deny to either books or films of popular middle-class entertainment a useful social service, as long as it is recognized that social service has nothing to do with the art of cinema or the art of fiction. What I object to is the idea that it is the critic’s business to assist films to fulfill a social function. The critic’s business should be confined to the art.

This is Graham Greene, writing in the magazine Sight & Sound 69 years ago. I find myself agreeing with some of the premises in his first paragraph and practically none of those in his second. Even pretending to choose what the best movies of 2005 were automatically means compromising with the truth. One could obviously come up with lists of movies that never made it here and those that didn’t receive monster ad campaigns, yet are, in many cases, just as good or better. But playing the game usually means a) assuming that everyone has heard about and had access to all the same goods; b) factoring out everything one has managed to miss (which is a lot of movies for all of us — including, in my case, a whopping 11 titles in David’s list of 20); and meanwhile c) swaying like a reed to the fickle whims of the film companies. (As a Chicagoan, I’m supposed to belong to the heartland and not be part of the intelligentsia of New York and Los Angeles, which means I had to keep revising my local list as various opening dates in Chicago got bumped to after the New Year. So I’m glad that I can take a broader view of things here, in the more democratic climes of cyberspace.) Greene’s second paragraph presupposes that “art” and “social function” are mutually exclusive. Since I don’t share that assumption, I believe it is part of the critic’s business to help films fulfill a social function, part of which is artistic. Greene also seems to assume that we already have a serious public discourse about social and political issues, concluding that we can therefore concentrate on the art of cinema in our movie reviews. But since we lack the kind of serious public discourse that he assumes — and it’s questionable whether any country has ever had it — I don’t think we can claim that luxury. Last year, Fahrenheit 9/11 was important precisely because it took over some of the function the evening news should have performed. And if, for instance, we had a president who was capable of acknowledging that Saddam Hussein and Osama Bin Laden were once valued allies of the United States, thus making us partially responsible for their empowerment, a certain modicum of nuance might enter the public arena. But what we have isn’t so much a discourse as a series of mantras, such as the word freedom. Under these circumstances, alluding to the “freedom” we’re fighting for appears at least partially to mean our freedom to torture innocent Iraqis — not because we believe in torturing innocent people but because our representatives think our motives are so pure that we, unlike our enemies, are entitled to make mistakes of this kind as often as we like.

It seems to me that a lack of knowledge about what we’re doing explains a lot about the mess we’re in, and the best way our culture can sustain this lack of knowledge is by offering us pseudo-knowledge in various shapes and forms to keep us satisfied. According to this criterion, the main function of a film like Syriana isn’t to teach us anything new about the ownership of oil but to make us emerge from it feeling that we’re all wised up on the subject. Stanley Kauffmann virtually acknowledges this paradox at the end of his favorable review in the New Republic: “At the finish Syriana impresses, not because it is very moving, which it isn’t, or because it is crystal clear, which it also isn’t, but because it is so large, so encompassing, so seemingly privy to inside stuff — about the way the Middle East is being manipulated behind our backs and over our heads. At the end we feel that we didn’t know we wanted this film and are glad that our unconscious wish was granted.”

For me, that’s a good basis for something other than a rave. I would think that an honest recognition of our ignorance — precisely what Albert Brooks is offering in his forthcoming Looking for Comedy in the Muslim World — is the first necessary step toward enlightenment. But that’s not something our culture ordinarily sees as a virtue.

This worry is at the nub of my misgivings about Munich — quite apart from the fact that it bored me as a thriller because I’ve become unresponsive to most revenge plots, even when they’re thoughtfully deconstructive (as so many of them are nowadays). I’m certainly grateful that Spielberg has had second thoughts about making us feel good about killing Arabs — an entertainment staple he was so adept at in Raiders of the Lost Ark — as well as second thoughts about revenge. I appreciate that he now wants us to feel bad about having felt good — something that some members of the audience, and not only Arabs, were already feeling a quarter of a century ago. But is Spielberg really the one we should be turning to in order to reflect on the Middle East? 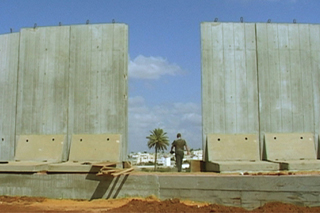 When I think of how much I’ve learned from Michel Khleifi and Eyal Sivan’s documentary miniseries Route 181: Fragments of a Journey in Palestine-Israel, this idea sounds patently absurd. Nevertheless, Route 181 isn’t part of the public discourse and Munich is, which automatically gives the latter the appearance of thousands of times more relevance — a burden I don’t think it can sustain. As David D’Arcy recently put it in GreenCine.com, “Welcome to the tyranny of movie culture, in which the screen version of an event becomes, if not the document of record, at least the dominant document.” Similarly, serious questions about the assassination of John F. Kennedy were allowed to become front-page news the moment Oliver Stone decided to make a movie about them, and not a moment before. And in the case of Munich, what obviously represents a large step for Spielberg doesn’t necessarily mean a new form of understanding for anyone else.

When it comes to The New World, I’m inclined to think that pseudo-innocence can be every bit as suspect as pseudo-knowledge. The truth of the matter is that I currently feel unequipped to judge Malick’s film as history and unequipped to judge it as art without that knowledge, so I’m forced to tangle with his transcendentalism and his ambiguous, difficult narrative and leave it at that, at least until the book I ordered from Amazon (Indians and English: Facing Off in Early America by Karen Ordahl Kupperman) arrives. It seems that many of my colleagues are prepared to take or reject the film on its own terms — as a mythic, mystic, pantheistic reverie — so why can’t I? For me this is a little bit like assessing Saddam Hussein and Osama Bin Laden without acknowledging that America helped to arm them both or defining the “fight for freedom” by carefully eliding the torture of innocent Iraqis. I can certainly respond to Malick’s lyricism and his taste for beauty. But when he resorts to some of the exquisite visual syntax of F.W. Murnau’s silent cinema, as he did in Days of Heaven and The Thin Red Line, does that mean he also wants us to revert to a 1920s understanding of what these films are about? And if not, how, exactly, does his understanding go beyond the 1920s? The problem is, believing that Malick’s art has some relation to history automatically gives it a social function. I also feel I have to come to terms with these issues in order to write even a capsule review — something that may take months, when I only have days at my disposal — and that’s where Greene’s first paragraph about compromise comes in. I look forward to your own lists, Scott and Tony, as well as any reactions you and David might have to any of the above.