Charlie and the Chocolate Factory

From the Chicago Reader (July 8, 2005). Nine years later, having recently reseen this fabulous film on Blu-Ray (a beautiful job from Warners, with many enticing extras), I would currently maintain that what I formerly called the “key cinematic sources” should probably have been called key cinematic cross-references — to which one should add Raul Ruiz’s City of Pirates for its own shot which purports to be a view of someone’s teeth from the inside of his mouth. — J.R. 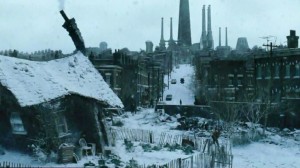 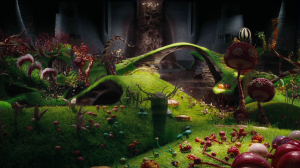 Tim Burton finally fulfills the promise of Beetlejuice (1988) with this imaginative masterpiece, adapted from the 1964 children’s book by Roald Dahl but characterized by Burton’s special feeling for color, architecture, and nightmarish dislocation. Adapted by John August, this schematic fable of five children invited to tour a mysterious candy factory is well served by the surrealistic design, Johnny Depp’s mannerist performance as the androgynous chocolate tycoon Willy Wonka, and the deft digital wizardry that multiplies actor Deep Roy into the entire workforce of the Wonka factory, performing crazed production numbers. (Among the key cinematic sources here are the ice cream factory in the Eddie Cantor musical Kid Millions and the hyperbolic The 5,000 Fingers of Dr. T.) There’s a streak of moralism, but it never becomes as sticky as the candy because the invention never flags. With Freddie Highmore, David Kelly, Helena Bonham Carter, James Fox, and Christopher Lee. PG, 115 min. 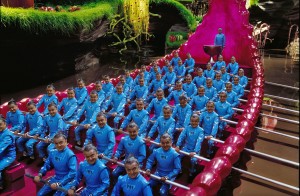