From the Soho News, October 20, 1981. Girish Shambu’s post on Facebook about Jacques Rivette’s Le Pont de Nord having “just popped up at both MUBI and Fandor on streaming” led me to unearth my original review of the film, which I’ve neglected to scan or post before now. — J.R. 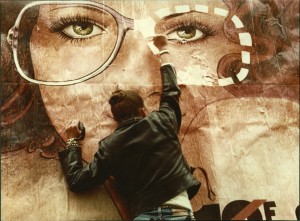 At a juncture like this. the New York festival splits into disassociated sections for me. One part furnishes a launching pad for a commercial venture that scarcely needs it, while the other is furnishing us with a tantalizing glimpse of movies that something called Commerce is otherwise steadily denying us. (Mutatis mutandis, the same can be said for the highly uneven collection of shorts shown with the festival features. It’s hard to know when or if my own two favorites — George Griffin’s Flying Fur, a wild burst of contemporary animation energy set to an old Tom and Jerry soundtrack, and Clare Peploe’s beautifully shot comic English sketch, Couples & Robbers, about a middle-class straight couple and an upper-class gay couple and how their lives and goods interact –- might turn up again, so I’m grateful to the festival for letting me see them.) 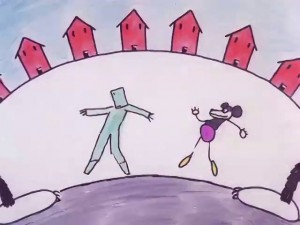 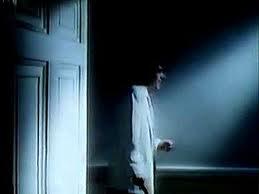 With Truffaut’s La Femme d’à côté (The Woman Next Door) and Jacques Rivette’s  Le Pont du nord (North Bridge), both New Wave veterans are giving us mixtures that we’ve seen in their works before. In the Truffaut, it is easy enough to recognize the tortured, repressed amour fou of Two English Girls and The Story of Adèle H., the old-fashioned MGM romanticism (complete with lush score) of Adèle H. and The Last Métro, and the giddy, leggv, erotic rhapsodies of The Soft Skin and The Man Who Loved Women in this torrid tale of adultery in Grenoble between neighbors Bernard (Gerard Dépardieu) and Mathilde (Fanny Ardant), who used to be lovers seven years ago, before their marriages. 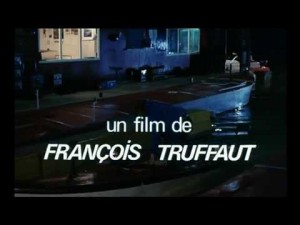 The scarcity of Rivette’s films makes their own precedents less visible, but these should nevertheless be acknowledged. Rivette is drawing upon the mysteriously fateful and existential encounter between two females which launched his Céline and Julie Go Boating, Duelle, and Noroît, occurring here between Marie (Bulle Ogier) and Baptiste (her daughter Pascale). In mystic terms, one might add that Marie’s little red Plan-Guide de Paris neatly takes the place of Julie’s book of magic spells in summoning up her shadow double (Baptiste, Céline). 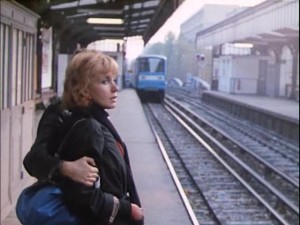 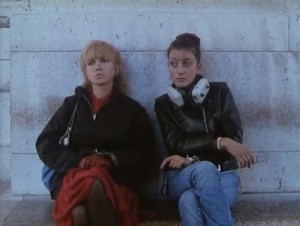 Equally operative is Rivette’s explicit intention to bear witness to the sociopolitical texture of his times in Paris Belongs to Us and Out 1: Spectre, signaled in each by an explicit date in the beginning: “June 1957,” ”April or May 1970,” and in the witty paraphrase-parody of the Star Wars opening that begins Le Pont de Nord, “Long ago and far away/October or November 1980” –- that is, shortly before the elections that toppled Giscard d’Estaing. 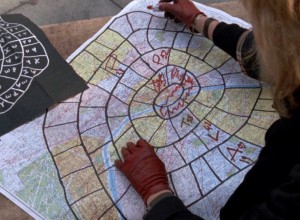 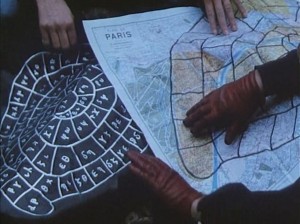 It’s a pity Rivette never cares much about selling his work and doesn’t offer any guidelines to the movie when he introduces it Wednesday night. He was much more helpful at the Tuesday press conference, where he explained that the lengthy sequence of Marie and Baptiste going through a clippings file alludes to the French political scandals of the previous seven years, and that the final sequence takes place on the very site of one of them (the costly slaughterhouse at La Villette that was built and dismantled without having been used). But of course there’s a problem in establishing a context –- one shared by his former screenwriter Eduardo de Gregorio’s Short Memory, another enigmatic thriller about political scandals that played at the festival in 1979.  How can one interest an audience in something real and concrete after snug middle-class fantasies like My Brilliant Career, My Dinner with André, and The Woman Next Door?  And how does one address these facts to festival-goers who habitually keep their poetry (e.g., Truffaut’s) and politics (e.g., Malle’s) in separate drawers? 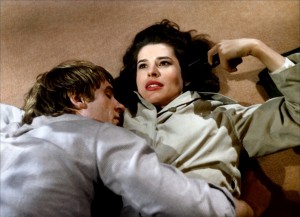 The Woman Next Door is tasteful, passionate, lyrical, sexy, eloquently acted, and haunting, but it won’t give you any new thoughts or feelings, just a few nice embroideries on some old ones. For me, the main ticket of attraction is the sensual face of  Fanny Ardant, sufficiently voluptuous at times to make me indifferent to what the rest of the movie is doing, or whether this works or not. Everything else tends to be fleeting (absorbing and forgettable, like Hollywood) –- a helicopter shot following a squad car, a crippled woman narrator relating the sad tale in flashback, a swell love scene with leafy patterns on a car window, a manic explosion from Dépardieu –- that starts leaving me like a dream on my way out of the theater. 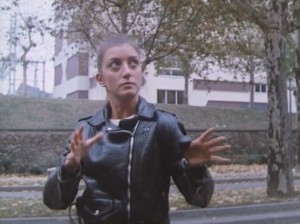 North Bridge, on the other hand, leaves me with a whole album of indelible images and uncanny encounters. Shot exclusively in Paris exteriors, it leads like a quixotic fairy tale from such enchanted moments as Baptiste putting her capsized motorbike out of its misery (cutting a wire to stop its motor the way a cowboy shoots a wounded horse), to Marie’s encounters with Pierre Clementi (amorous) and Jean-François Stévenin (political), to Baptiste’s weird “naturalistic” confrontations with a spider’s web spun out of a Fiberglass sprayer and a dragon perceived in a children’s slide. 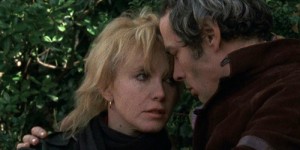 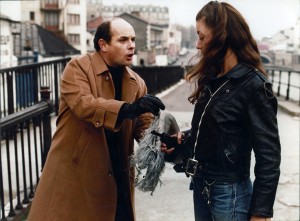 For Baptiste –- an abstract punk without a past, for whom “real life is a reign of terror,” projecting her staccato teenage body through angular pseudo-karate stances, headphone music, and ugly industrial spaces –- Paris is the tail of the dragon, a city of eyes to be defaced and spies named Max to be faced. (“A maximum of what?” “A maximum of Maxes.”) For ex-terrorist, bank robber, and prison convict Marie (an equally gritty performance from Bulle Ogier), waiting around for her dreamboat Clementi to bump her off, it’s a conspiratorial spider’s web, a marked map of Paris, and intermittently a kid’s game. For me, North Bridge is the most alive movie I saw at the festival, and I’m sorry that it’s headed straight back for Paris. 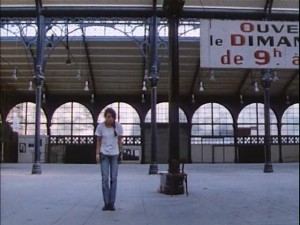 To salute its passing, let me quote an exchange with Rivette from his press conference, with apologies to the perceptive questioner for not knowing his name: “One of the wonderful things about your films is that you practically never know what’s going to happen next, and yet there is a cohesiveness from beginning to end, without a very hermetic causality. How on earth can you do this?” “I may not be the greatest director or actor or screenwriter in the world,” Rivette said in French, “but one thing I believe I can do quite well is construction.” His North Bridge proves it.