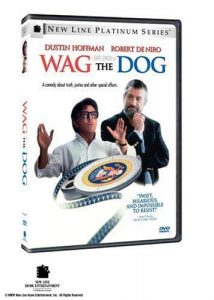 Robert De Niro plays a presidential spin doctor spurred into action after a sex scandal threatens to destroy his boss’s chances for reelection. He flies to southern California, engaging a flamboyant Hollywood producer (Dustin Hoffman, reportedly lampooning Robert Evans) to help fake a war in Albania that will make the president shine again. Hilary Henkin and David Mamet’s script is gleefully hyperbolic without ever straying from its political target — the gulf war is repeatedly cited as the conspirators debate what the American public will swallow. Wag the Dog falters only in coming up with an adequate curtain closer (and in keeping both public response and the president out of frame, which makes the proceedings more theoretical than is necessary). Otherwise this is hilarious, deadly stuff, sparked by the cynical gusto of the two leads as well as the fascinating technical display of how TV “documentary evidence” can be digitally manufactured inside a studio. Barry Levinson directed with a reasonable amount of panache; with Kirsten Dunst, Anne Heche, William H. Macy, Andrea Martin, and Willie Nelson. Starts next Friday, January 2. — Jonathan Rosenbaum 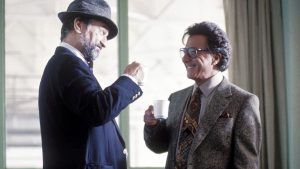