Salt Of The Earth 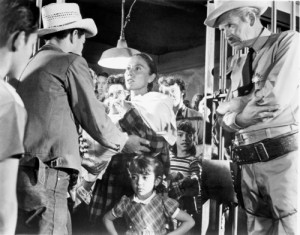 This rarely screened 1954 classic is the only major American independent feature made by communists; a fictional story about the Mexican-American zinc miners in New Mexico then striking against their Anglo management, it was informed by feminist attitudes that are quite uncharacteristic of the period. The film was inspired by the blacklisting of director Herbert Biberman, screenwriter Michael Wilson (A Place in the Sun), producer and former screenwriter Paul Jarrico, and composer Sol Kaplan, among others; as Jarrico later reasoned, since they’d been drummed out of Hollywood for being subversives, they’d commit a crime to fit the punishment by making a subversive film. The results are leftist propaganda of a very high order, powerful and intelligent even when the film registers in spots as naive or dated. Basically kept out of American theaters until 1965, it was widely shown and honored in Europe, but it’s never received the recognition it deserves stateside. If you’ve never seen it, prepare to have your mind blown. 94 min. (JR)