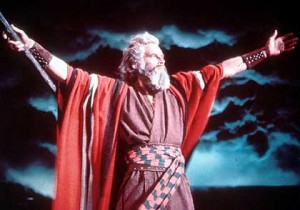 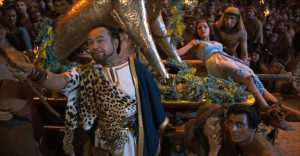 With a running time of nearly four hours, Cecil B. De Mille’s last feature and most extravagant blockbuster is full of the absurdities and vulgarities one expects, but it isn’t boring for a minute. Although it’s inferior in some respects to De Mille’s 1923 picture of the same title (which used the story of Moses as an extended prologue to a contemporary tale) and some of the special effects look less plausible now than they did in 1956, the color is ravishing, and De Mille’s form of showmanship, which includes a personal introduction and his own narration, never falters. Simultaneously ludicrous and splendid, this is an epic driven by the sort of personal conviction one almost never finds in more recent Hollywood monoliths. With Charlton Heston, Yul Brynner, Anne Baxter, Edward G. Robinson, Yvonne De Carlo, Debra Paget, John Derek, Cedric Hardwicke, H.B. Warner, Judith Anderson, Vincent Price, John Carradine, and many other familiar faces, including Woody Strode as the king of Ethiopia. 220 min. (JR) 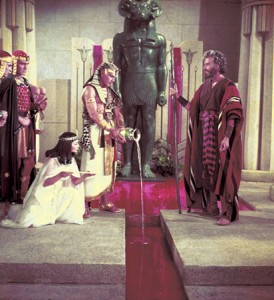 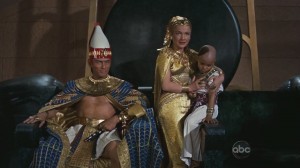