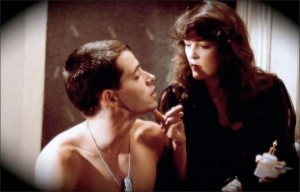 Based on a play that constitutes part two of Neil Simon’s autobiographical trilogy, concerned with the experiences of the hero (Matthew Broderick) at boot camp in Biloxi, Mississippi, in 1943, this is an engaging, well-crafted comedy that receives very able direction from Mike Nichols. The period decor and details are nicely handled (apart from the silly decision to adapt clips from Buck Privates and Movietone News to the ‘Scope format, yielding an unnecessary anachronism), and while most of the characters are fairly standard types —  sadistic drill sergeant (Christopher Walken), Jewish intellectual (Corey Parker), Polish lout (Matt Mulhern), raunchy prostitute (Park Overall), sophisticated girlfriend (Penelope Ann Miller) — the actors give them their best shot, including the somewhat miscast Walken. The nostalgic visual style of the film, successfully modeled on Norman Rockwell by production designer Paul Sylbert and cinematographer Bill Butler, is especially fetching, and the somewhat Woody Allen-ish offscreen narration shows Simon at his best. Perhaps this movie isn’t as wise or as profound as Simon wants it to be, but it is certainly a cut above sitcom complacency, and packed with wit and charm (1988). (JR) 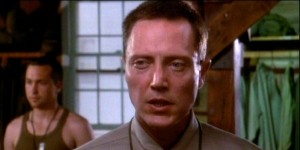 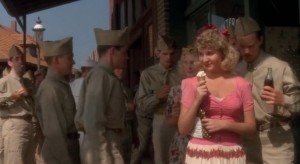