The Ballad Of The Sad Cafe 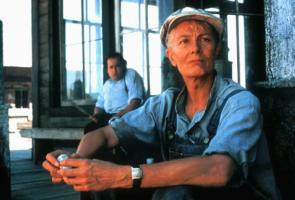 For his filmmaking debut, writer, actor, and stage director Simon Callow has taken on the celebrated novella of Carson McCullers, making some use of Edward Albee’s stage adaptation but paring away much of its dialogue, including the use of an onstage narrator. The grotesque plot, set in a southern mill town during the Depression, concerns a circle of unrequited love: an eccentric bootlegger and folk doctor (Vanessa Redgrave) dotes on a hunchbacked dwarf (Cork Hubbert) who in turn loves an embittered convict (Keith Carradine), once the bootlegger’s husband. The pain of all this builds to an excruciating and violent fist fight between the bootlegger and the convict, witnessed by the entire town. The three leads are superb, and Rod Steiger and Austin Pendleton are fine in small roles. If Callow accords his stars a few too many close-ups, he still does a creditable job of trying to get us to believe in a tale that is difficult to imagine without the fragile weave of McCullers’s prose (Callow evidently sees it as a fairy tale with elements of magical realism). His stage background helps as well as hinders: one never believes in the town as anything but a set populated by actors, but the concentration of his direction certainly solicits the utmost from his cast. The results are clearly not for everyone, but even if you can’t quite swallow the material, it’s a searing experience. (JR)