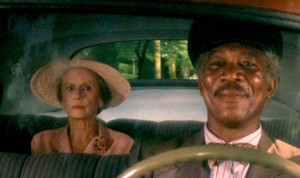 Alfred Uhry adapts his own play about the relationship between a crotchety, elderly Jewish woman living in Atlanta (Jessica Tandy) and the slightly younger black man (Morgan Freeman) hired by her businessman son (Dan Aykroyd) to drive her around (1990, 99 min.). Uhry’s play, which won a Pulitzer Prize, is a sentimental actors’ vehicle so fundamentally theatrical in conception that nothing can really make it into a film; aided by a lachrymose Hans Zimmer score, it fairly drips with the kind of nostalgic liberal platitudes that make its upscale target audience applaud at the end  — they’re actually applauding themselves. Fortunately, the three actors manage to get a lot of mileage out of the material: although one never quite believes that Tandy’s character is Jewish, she is remarkable in every other respect, and Freeman and Aykroyd are wonderful throughout. The movie also has something legitimate and instructive to say about the subtlety and intricacy of everyday race relations in the South during the period covered (roughly 1948 to ’73). The self-conscious period decor by Bruno Rubeo is never quite convincing — Atlanta is never made to seem like a large city — and the mise en scene of director Bruce Beresford basically consists of letting the actors do their utmost. Freeman, the only southerner among the three leads, manages to pack a wealth of concrete observation into his performance. With Patti LuPone and Esther Rolle. (JR) 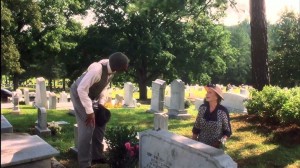