Time of the Wolf

Michael Haneke’s best films — like The Seventh Continent and Code Unknown — tend to create their own world and their own rules, whereas others — like Benny’s Video, Funny Games, and this postapocalyptic tale — offer variations on films others have already made. But Haneke is still a masterful director, and his authority carries this well-acted and attractively shot account of a family from an unnamed city trying to survive in the sticks after an unspecified catastrophe. (Some have criticized the lack of explanation, but the relatively lame and familiar backstories of most such movies hardly seem an improvement.) We’ve seen much of this before, but Haneke’s theme of civilization gradually sliding away remains timely. With Isabelle Huppert and Patrice Chereau; most of the dialogue is in subtitled French. 110 min. A 35-millimeter ‘Scope print will be shown. Gene Siskel Film Center. 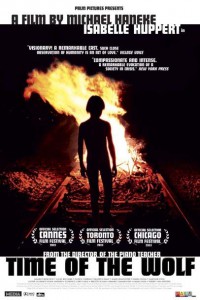