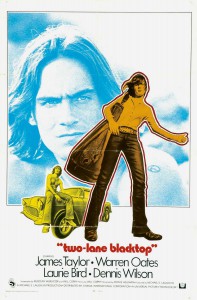 This exciting existentialist road movie by Monte Hellman, with a swell script by Rudolph Wurlitzer and Will Corry and my favorite Warren Oates performance, looks even better now than it did in 1971, although it was pretty interesting back then as well. James Taylor and Dennis Wilson are the drivers of a supercharged ’55 Chevy and Oates is the owner of a new GTO (these nameless characters are in fact identified only by the cars they drive); they meet and agree to race from New Mexico to the east coast, though side interests periodically distract them, including various hitchhikers (among them Laurie Bird). (GTO hilariously assumes a new identity every time he picks up a new passenger, rather like the amorphous narrator in Wurlitzer’s novel Nog.) The movie starts off as a narrative but gradually grows into something much more abstract — it’s unsettling but also beautiful. 101 min. A 35-millimeter print will be shown; film scholar Hank Sartin will introduce the film and give a lecture after the screening. Gene Siskel Film Center, Art Institute, Columbus Drive at Jackson, Tuesday, February 27, 6:00, 312-443-3737.