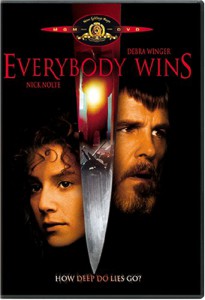 Although it’s far from being wholly satisfying, this bizarre, slow-moving thriller about a righteous detective (Nick Nolte) and a schizophrenic prostitute (Debra Winger) trying to uncover the corruption in a small town in Connecticut that sent an innocent young man to prison for a brutal murder —  the first movie scripted by playwright Arthur Miller since The Misfits — has the virtue of coming across like a picture from another era: a 40s film noir, or a neurotic melodrama from the 50s. Directed by Karel Reisz (Morgan!, The French Lieutenant’s Woman) and produced by Jeremy Thomas (Insignificance, The Last Emperor), the film explores its subject atmospherically rather than analytically or in terms of slam-bang action, and what mainly makes it interesting isn’t so much its lame mystery plot as Winger’s character and performance — which manage to triumph over the femme fatale slot the part seems destined for — as well as a peculiar young religious outcast (Will Patton) whose preoccupations form the background to the murder. While parts of the overall conception (including the detective hero) seem innocent and dated, it’s still a welcome relief from the usual right-wing buddy-cops nonsense. With Jack Warden, Judith Ivey, Kathleen Wilhoite, and some striking music by Mark Isham and Leon Redbone. (JR) 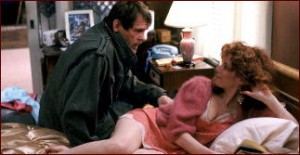