Three hours and three minutes of guff and goo about the nobility of killing and/or being killed for arbitrary reasons, whether you’re an American soldier or a Japanese. This is the Star Wars view of the U.S.’s entry into World War II (enemies are invisible and bloodless), which means that even though much of the story takes place in Hawaii, Hawaiians are deemed inconsequential, and the only ordinary Japanese we ever see apart from a few old soldiers are passing details in two shots: kids in the distance flying a kite and a couple of nice ladies in kimonos, both viewed before — not during or after — an air attack. If you decide to hit the concessions stand (where you’re bound to have lots of company), I’d suggest going out for popcorn during either the first hour or the third, because the second features some pretty good big-screen effects involving planes, ships, and explosions. (This is from the same team that brought you The Rock and Armageddon.) The lead characters are fairly interchangeable jocks and nurses — a bit like the characters in Starship Troopers but without the irony, aside from Jon Voight under tons of makeup striking presidential poses as FDR. (When he struggles out of his wheelchair like Dr. Strangelove to make a point, we aren’t supposed to laugh.) We also get Cuba Gooding Jr. as a cook in the segregated army who finally gets to shoot at Japs just like the heroes (Ben Affleck and Josh Harnett), who — would you believe it? — are in love with the same nurse (Kate Beckinsale). Michael Bay, who coproduced with schlockmeister Jerry Bruckheimer, directed the pedestrian Randall Wallace script; other cast members include Tom Sizemore, Colm Feore, Alec Baldwin, and Dan Aykroyd. (JR) 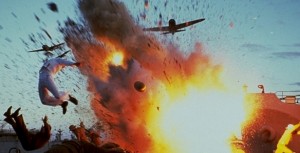