Rocco And His Brothers 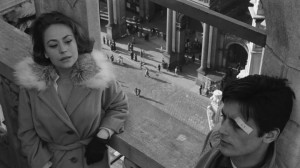 An epic (1960) from Luchino Visconti about five brothers (Alain Delon, Renato Salvatori, Spiros Focas, Rocco Vidolazzi, Max Cartier) who, with their widowed mother (Katina Paxinou), leave their impoverished farm in southern Italy for the corruptions of Milan. This looks like a primary sourcebook for the overheated operatic styles, homoerotic intensity, quasi-incestuous delirium, and casual conceptual misogyny of Scorsese, Coppola, and Cimino — and you may have to value the ranker elements of those filmmakers more highly than I do to consider this precursor more than a mannerist touchstone. Visconti is an incontestable master in films as diverse as La Terra Trema, Senso, The Leopard, and The Innocent, but those films don’t employ women as unconvincingly or as insultingly as this one does. Still, you may be swept along by the sheer grace and stamina of the mise en scene and Nino Rota’s music. With Annie Girardot, Roger Hanin, Suzy Delair, Claudia Cardinale, and, in a smaller role, Adriana Asti. In Italian with subtitles. 180 min. (JR) 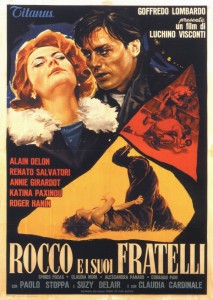