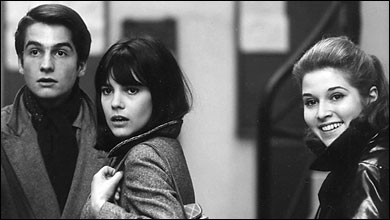 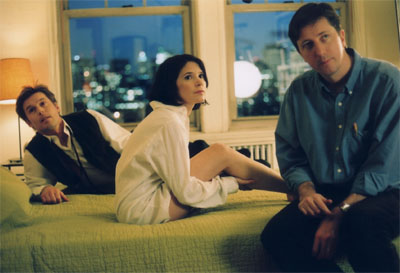 Directed and written by Hal Hartley 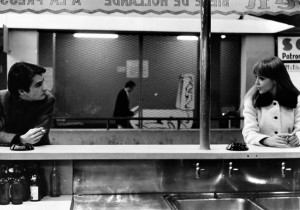 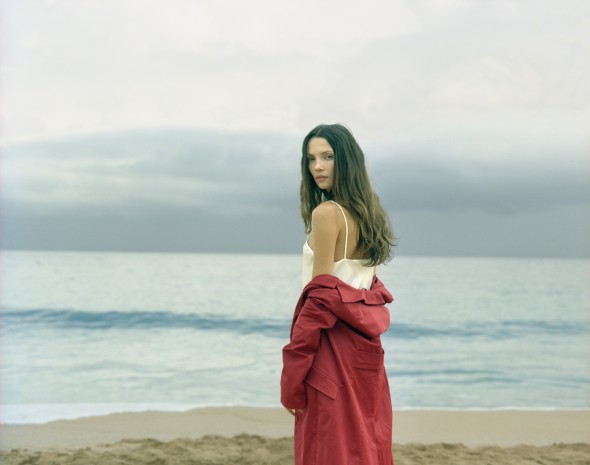 After Jean-Luc Godard’s 11th feature, Masculine Feminine, opened in New York in 1966 I was ready to defend it uncategorically against all detractors, of whom there were quite a few. It was a kind of contemporary newspaper presented from the perspective of a character in his early 20s (Jean-Pierre Léaud), my own age at the time, and the episodic narrative was full of interruptions and tangents, some relating to leftist concerns such as the war in Vietnam and French labor disputes.

But the curse of influential work is that it becomes dated after its innovations have been absorbed. Here and there the film’s style and content are still too flinty to prompt imitation, but other aspects have become all too familiar. And much of the original charm of the film, showing in a new print at the Music Box, has evaporated. 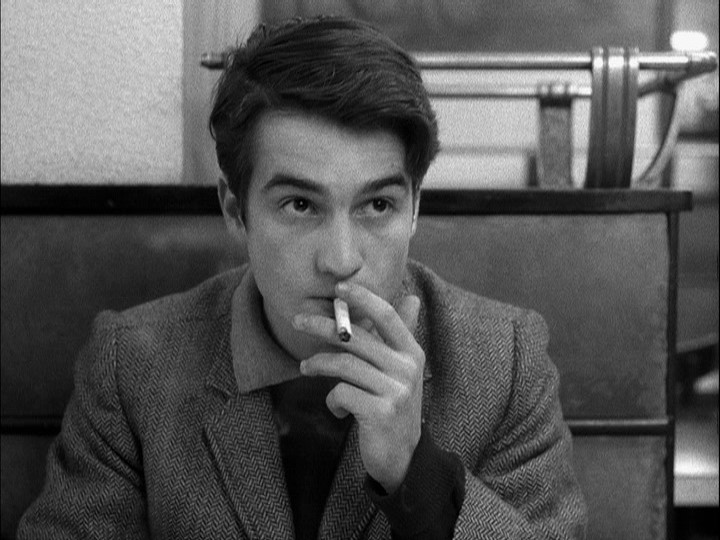 Léaud plays a solitary figure named Paul, who’s similar to Antoine Doinel, his character in François Truffaut’s The 400 Blows (1959) and Antoine and Colette (1962). Paul serves as a mouthpiece for Godard, but Léaud is as expressive and touching as he was in Truffaut’s films, so he can’t be blamed for Godard’s attitudes. If anything, he provides a psychological context for some of those attitudes by exposing Paul’s vulnerability. One priceless, wordless moment occurs in a laundry, where he’s talking with a communist activist friend named Robert (Michel Debord) and crudely miming sexual intercourse with his hands. He’s laughing delightedly, then is suddenly mortified to realize what he’s just done.

None of Godard’s features made before 1968 is devoid of formal interest, but Masculine Feminine is missing many of the things that tend to make the others pleasurable — Raoul Coutard’s cinematography, the bold and exciting use of color and music, the presence of Anna Karina. The film’s segmented structure reflects its subtitle, “15 Precise Facts,” which describes things that turn out to be neither precise nor facts and which may not even add up to 15. But the film is distinctive mostly for its observation of youthful romantic and sexual behavior; it’s one of the clearest indications in Godard’s work that ethnography was his main area of study at the Sorbonne. 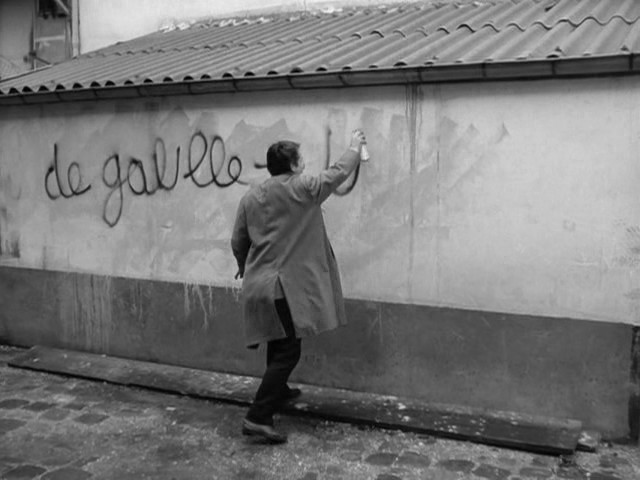 One way Godard generated the unscripted dialogue was by firing questions at the actors through tiny speakers in their ears, then getting other actors to repeat the questions. Paul, who’s supposed to be working as a pollster during part of the film’s action, asks similarly aggressive questions during his patronizing interviews, which often resemble his conversations with Madeleine (Chantal Goya), the French rock singer who becomes his girlfriend. His longest interview is with someone just selected as “Mademoiselle 19,” a sitting duck if there ever was one — she doesn’t even get a screen credit, and an intertitle identifies her only as a “consumer product.” The scorn and hostility Paul and, to a lesser extent, Robert show her and other women, including Madeleine, is unrelenting. Not surprisingly, just about the only intellectual reflections in the film come from the men. Some belated wisdom from Paul in his offscreen narration about the imposed agendas of his interviews can’t begin to mitigate all the misogyny. 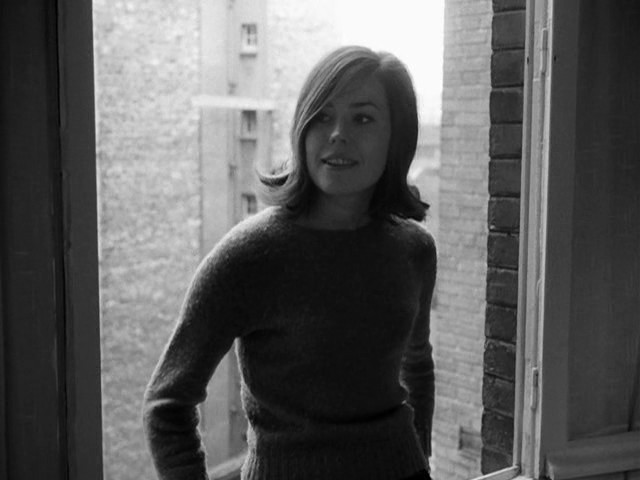 Hal Hartley’s flaky, funny, and sexy The Girl From Monday is an SF thriller that may have as much relevance to today’s world as Masculine Feminine had to the mid-60s — Hartley calls it a “fake science fiction movie about the way we live now.” It has two sympathetic heroines. The “girl” of the title looks like a grown woman (played by the eerie Brazilian model Tatiana Abracos), though she’s actually a nameless alien from the distant constellation Monday — part of a disembodied collective entity that’s taken a human form. The other is a courageous executive turned resistance fighter named Cecile (Sabrina Lloyd). The hero, Jack Bell (Bill Sage), is posing as an executive, but he’s part of the same collective — a strayed alien that the girl has been sent to retrieve.

All the characters, alien and human, speak like automatons yet come across as dopey in a charming way. In this respect Hartley’s work stems from 60s Godard — not from his more solemn sociological and documentary-style essays, like A Married Woman (1964), Masculine Feminine, and Two or Three Things I Know About Her (1966), but from the jazzier, more Hollywood-derived Breathless (1960), A Woman Is a Woman (1960), Les carabiniers (1963), Band of Outsiders (1964), and Alphaville (1965). Hartley’s first features — The Unbelievable Truth (1990), Trust (1990), Simple Men (1992), Amateur (1994) — were initially treated as offbeat mainstream rather than avant-garde fare, but The Girl From Monday has a fragmented look and frantic rhythm that’s closer to the latter. 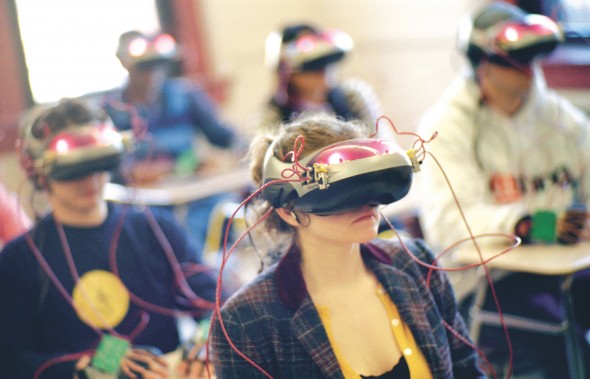 Many things in Hartley’s films can be traced back to Band of Outsiders, but The Girl From Monday, by virtue of being set in the future though obviously shot in present-day urban spaces, is indebted to Alphaville. It also echoes the color shifts of Godard’s 1967 Anticipation, a lesser-known, more experimental short color film that was a kind of thematic and stylistic afterthought to Alphaville.

A poetic satire and genre parody, The Girl From Monday imagines a future in which a revolution that puts a company called MMM (Major Multimedia Monopoly) in charge of everything has led to a “dictatorship of the consumer.” Disposable income is the key revolutionary virtue, each individual is regarded as “an investment with growth potential,” and the “most sexually active and sexually available adults are the biggest spenders.” Tattooed on everyone’s wrist is a bar code, and when two people decide to have sex they have an ATM-like machine scan their bar codes, boosting their separate credit ratings through this “investment” in each other. This socially correct sex also boosts the general economy. 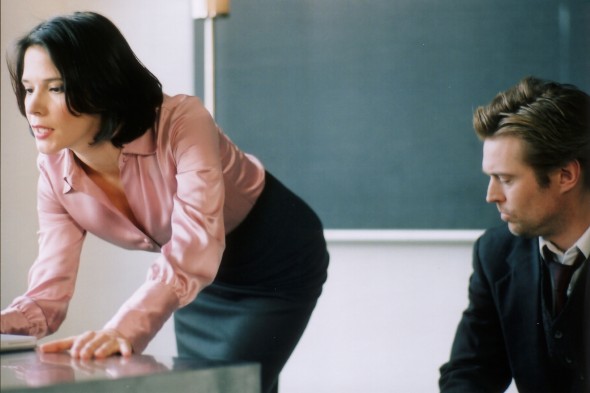 Acts of love, charity, and eroticism carried out for their own sake or “because they feel good” are seen as perverse, self-indulgent, and barbaric. They’re also the activities of a band of youthful, scruffy counterrevolutionaries whose favorite forbidden text is Thoreau’s Walden; they have no credit and are labeled terrorists. Cecile takes a 17-year-old rebel (Leo Fitzpatrick) as a lover and is ultimately arrested as a counterrevolutionary. She’s sentenced to two years of hard labor, teaching sedated high school students.

Paradoxically, this world in which the consumer has become the product is puritanical rather than hedonistic (apart from the pleasure that comes from boosting one’s credit rating) and tribal rather than individualistic. It’s no surprise that the alien Jack Bell has spearheaded the revolution that put MMM in power — or that the human traits he gradually adopts lead him to spearhead the counterrevolution. When the girl from Monday emerges from the sea, the movie’s equivalent to outer space (Alphaville used the freeways outside Paris), we can’t be sure whether he’ll ultimately align himself with the collectivists or the individualists.

Shot on digital video in New York City and Puerto Rico, the film fluctuates between black and white and color and between handheld motion and freeze-frame stasis, often achieving a blurry effect in between. But as in much of Hartley’s previous work, the style of the dialogue delivery is laid-back comic deadpan, anchoring the often frenetic visuals and giving one a calmer, more detached viewpoint from which to consider the action. Above all, Hartley’s playful sense of the absurd as he confronts the relation of consumerism to sex is more philosophical than political, less despairing than grimly amused — and more thoughtful as a consequence.