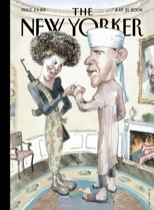 Seeing two kinds of discourse in a head-on collision can sometimes be instructive, and the current flap over the cover of the July 21 issue of The New Yorker offers a good illustration of how divided against itself this country can be. I’ve been thinking lately that America At War With Itself has been such a constant in our national life for so long now—at least since the JFK assassination—that many of us are ready to take it as permanent and unchangeable. One might even argue that if Barack Obama proposes a radical change in the way our political life is conducted—one that transcends the issue of whether or not he’s a “conventional” politician—this transpires in the way that he suggests trying to put an end to that war by looking for common aims and interests. Which means nothing less than a change in the national discourse. This is the real war that he’s trying to end–not the alleged “war” in Iraq that isn’t really a war at all but a military occupation. (The fact that it isn’t really a war starts to become clear as soon as one seriously tries to define either victory or defeat coherently. What could either possibly mean if one doesn’t bother to factor in the will of the Iraqi people–which is precisely what most of the American media have been failing to do? There are even times when one wonders if what McCain really means unconsciously by “winning with honor” is eliminating the Iraqi population.)

One can easily argue, of course, that America has always been at war with itself, even in periods like the 50s when there was an illusion of consensus. The point is, what national discourse about either consensus or the lack of it is allowed to rule? Obama is proposing the sort of consensus that entails compromise on everyone’s part, which obviously means confounding—and therefore frustrating–the factionalism of the left as well as the right.

From this point of view, The New Yorker’s satirical cover is plainly counterproductive, and would be even if it were funny. It accepts and promotes polarization of a kind that Obama is trying at all costs to avoid. Of course, in some ways The New Yorker has always been founded on an “us” versus “them” mentality, so the cover is nothing more than a vulgar clarification of this fact–a sneering example of what the yahoos are supposed to think. But what it also reveals is a no less sneering example of what we think.

Of course, this perception of what the yahoos think may well be accurate: a recent Newsweek poll maintains that 26% of those polled believe he was raised as a Muslim, 39% believe he attended a Muslim school as a child, and 12% thinks that he used a copy of the Koran when he was sworn in as a U.S. Senator. This sounds like the Swift Boaters must be working overtime. But even if these figures are truthful indications of the extent of the misinformation that The New Yorker’s cover is ridiculing, what exactly is gained by ridiculing those who are misinformed except for a dubious form of self-congratulation? Whose mind is going to be changed by this ridicule? It only suggests once again that the only possible future of this country is a permanent state of internal warfare, which makes the very notion of an Obama Presidency unthinkable, and the future of this country disagreeable to contemplate. Is it really futile to hope we might attain any other kind of discourse? [7/14/08]