From The Thousand Eyes, Fall 1978. Carrie Rickey and I embarked on this film series and article shortly after we became flat mates, but lamentably it didn’t pan out as we hoped it would; our program notes, for starters, never got distributed. — J.R.

By Carrie Rickey and Jonathan Rosenbaum

One of the consequences of describing the world around us is that language separates into different senses what we often experience as a unified whole. Language, an instrument — perhaps the instrument — of’ culture, overvalues the visual at the expense of the other four senses. Our language for the way we see is more precise: looks are eminently describable, we discuss color, dimensions, surface.

Our language for the way we hear is a jumble, less precise. Ambient sound consists of so many simultaneous events: acoustics of a space., buzz of appliances, rhythm of a clock, crowd voices, footfall. We “focus” on a visual event; we “concentrate” on sound, which is more difficult to pinpoint. We screen out the rumble of the subway train to concentrate on a movie.

If movies themselves are a selective screening process, the ways we experience them often censor out other elements. The way we talk about films — referring to “viewers” and “spectators”, talking about “seeing” a movie, asking, “How does it look?” — incorporates this idea of sensory censorship. But to invert the terms — to talk of movie “listeners” or “auditors”, to ask, “How does the movie sound?” — would just be a flimsy example of affirmative action on behalf of that neglected component of movies, sound. 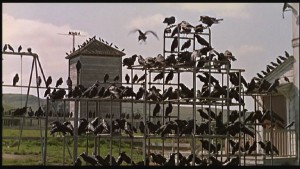 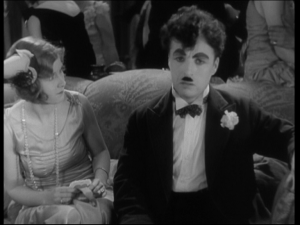 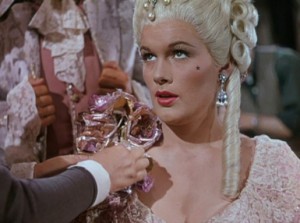 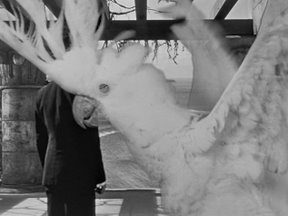 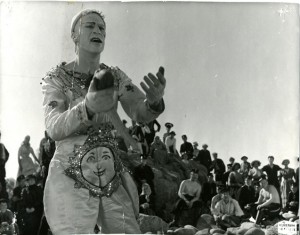 The threatening rustle of wings in The Birds. The swallowed whistle in City Lights. The heartbeat recorded by a mike in Jean Hagen’s bodice in Singin’ in the Rain. The gunshots and screams in Last Year at Marienbad. The zither in The Third Man. The aggressive city-desk wisecracks in His Girl Friday and the squawk of a cockatoo in Citizen Kane. The muffled drumbeats at the beginning of The Naked Night. The zipping of laser swords in Star Wars and the interplanetary music message in Close Encounters of the Third Kind.

To talk about sound thinking, we have to open up the experience of movies rather than box it up in reductive visual or aural metaphors. We have to think of the relationship between what we hear and what we see in a movie. How do the visual and aural influence each other? We have to distinguish between the artistic possibilities and implications of direct sound — sound recorded live, in synchronization with filming — and mixed or dubbed sound, the use of sounds recorded at different times, and consider how the ideology of realism conditions our response to sound and image.

More often than not, our responses to sound are conditioned by an only partially conscious assumption that it serves as a kind of “guarantee” of realism and verisimilitude, a safety net that insures or extends our suspension of disbelief when we watch a movie. (The laughter that commonly greets most silent films shown without musical accompaniment today provides a comparable sort of safety net.) When “non-realistic” uses of sound are practiced — uses that disturb or confound the set of conventions which generally designate “the real” — the whole apparatus of filmgoing as we know it becomes changed, altered.

As language separates into different senses our apprehension of the world, so technology for recording image and sound are separate processes. The combinations of these two functions can be complementary (Oliver Hardy stoops down and we hear his pants rip), contradictory (in The Magnificent Ambersons, just after the narrator explains that the instruments of the serenade will “presently release their melodies to the dulcet stars,” we see Joseph Cotton stumble into and smash his bass viol), or dialectical (Godard narrating a scene in order to interrogate and criticize the veracity of what we see.)

That patriarch of sound recording, Thomas Edison, anticipated the ghetto in which sound would remain by attempting to create the sound film in order to complement the realistic reproduction of the image. Thinking along the lines that image produces (or preceded) sound is cart-before-horse logic. What of the sounds that “cue” our reading of an image? As Chris Marker proves in Letter From Siberia, the same image accompanied by different texts can produce different meanings: a view of the town of Iakoutsk is accompanied with three successive commentaries — one praising the USSR, one critical of the USSR, and one presenting more neutral information.

When we speak of sound, we’re talking about at least six things: dialogue, voiceover, music, sound effects, ambient noise, and silence, each of which can be defined and employed quite differently by any filmmaker.

The overlapping chatter in California Split, the manic zigzagging exchanges in Christmas in July, the mutterings overheard in Trafic, the closeted CB conversations in Handle with Care, are four ways of creating comic confusion with dialogue, while Ivan produces it with a Ukrainian peasant and a barking monologue on a p.a. system.

Godard’s whispered voiceovers suggest two or three ways of reading the images in 2 or 3 Things I Know About Her. Jackie Raynal’s address to the camera tells us what we are — or aren’t — about to see in Deux Fois. Von Sternberg’s The Saga of Anatahan complements the visuals with his narration, telling us what we see, what we will see and what we won’t see. Yvonne Rainer’s Kristina Talking Pictures develops Kristina’s character by using different actresses and voices, in synch and out, to corroborate and contradict diverse displays of visual evidence. 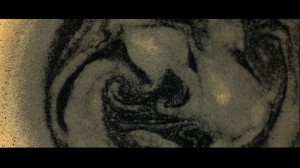 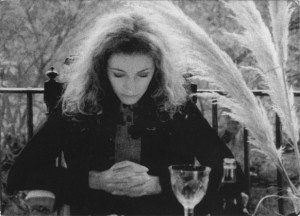 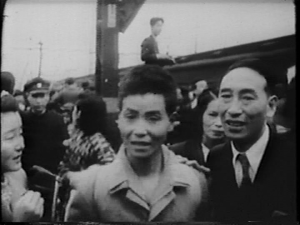 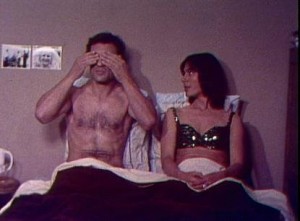 Music is the backbone of several movies. Voices can be recorded directly, sung with accompaniment in playback in At Long Last Love, Moses and Aaron, Mozart in Love and Follow the Fleet; prerecorded, as in Love Me Tonight, or post-recorded, as in Sunrise. Movies can be punctuated by original scores, as in Touch of Evil and The Nun; and music dictates the whole structure of Black and Tan, where Duke Ellington’s tunes inform all the visuals.

Sound effects, creating environments and atmospheres Through the dubbing or mixing of evocative noises, are especially palpable in Marguerite Duras’ Destroy, She Said, where the peacefulness of a country house is disrupted by menacing sounds; in Bresson’s Lancelot du Lac, where the weight of a dying civilization is audible with every clash of swords and clank of armor; in Tati’s Trafic, where the discreet mincing of steps around an empty exhibition hall becomes as comically spaced as the sounds of a pingpong game.

Ambient noise, the encompassing sound of a given environment recorded directly, is the essence of The Conversation, a film dedicated to visualizing and decoding the aural, and Renoir’s La Chienne, which lyrically captures the varied sounds heard in flats and thoroughfares in 1931 Paris, broadening our sense of space beyond the frames of the images. It is comparably functional in isolating the voices of men in prison cells in Sternberg’s Thunderbolt, and scrambling the excited sounds of gamblers in casinos in Altman’s California Split.

The uses of silence — that problematic notion of soundlessness, that medium through which all sound becomes expressive — are even more disparate. On the one hand, the setting off of discrete noises in such early talkies as The Testament of Dr. Mabuse, lvan, Thunderbolt and La Chienne, where sound recording is intermittent; on the other hand, the dynamic alternation of silence and deafening industrial noise invigorating 2 or 3 Things I Know About Her and Trafic. If certain uses of silence seem comparable to rests in music, the aural pauses in The Crucified Lovers, The Nun, Moses and Aaron and Lancelot du Lac resonate with the sounds that they separate. 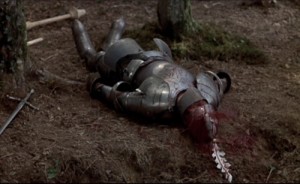 This program intends only to open discussion of sound thinking, not to offer a catalogue or provide a comprehensive survey of sound in movies. As organizers of an introductory foray into a subject that has not, to the best of our knowledge, been taken up in any previous film series, we have tried to make our selection pluralistic and suggestive rather than definitive in any sense.

Certain films that were desired — Pudovkin’s Deserter, Kuleshov’s The Great Consoler, Duras’s India Song, Gremillon’s Lumière d’été, Elaine May’s Mikey and Nicky, Rivette’s Noroit, Renoir’s La Nuit du Carrefour, Godard’s Numéro Deux, Tati’s Playtime, Vertov’s Enthusiasm and Dreyer’s Gertrud — were not available to us for a theatrical screening, although the latter two, along with Marcel Hanoun’s Une Simple Histoire, can be seen in the repertory of Anthology Film Archives. Also playing elsewhere in this season’s Carnegie Hall Cinema program are Vampyr, The Blue Angel and Blackmail — celebrated reference points in cinema, like M and Ordet, that are not generally spoken of in reference to their prodigious uses of sound.

The point of putting together a film series isn’t just to make a certain number of movies available. We want to facilitate a public discussion, a means of social exchange, and, with this aim in mind, certain accompanying events and materials are already in the planning stages. Each film in the series will be accompanied by program notes — not in order to propagate a “correct line” about any movie, but rather to extend the reach of inquiry by including other perspectives. Some of these notes, in turn, will form the nucleus of an anthology of critical writing about sound which we hope to produce. 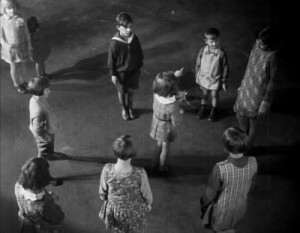 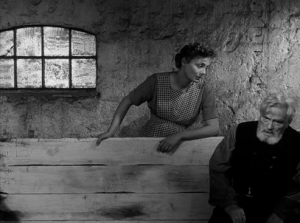