A WOMAN UNDER THE INFLUENCE (1976 review)

From Monthly Film Bulletin, Vol. 43, No. 504, January 1976. As with some of my other reviews from this magazine reproduced on this site, the credits and synopsis are omitted.– J.R. 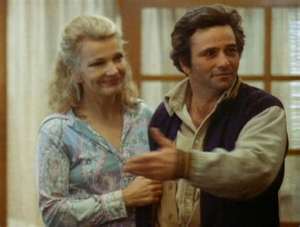 Woman Under the Influence, A

Beginning with Shadows, the films of John Cassavetes have been at once limited and defined by their anti-intellectual form of humanism, an unconditional acceptance of the social norms of his characters that exalts emotion and intuition over analysis and, in narrative terms, looseness and approximation over precision. Used as an instrument for delivering a thesis (as in Faces) and/or allowing actors to indulge themselves in fun and games (as in Husbands), it is a style which characteristically operates like a bludgeon, obscuring at least as much as it illuminates while confidently hammering home its proud discoveries. But when it serves as a means for exploration, as in Shadows or A Woman Under the Influence –- however halting or incomplete a method it may be for serving that function — it deserves to be treated with greater credence. Obviously this distinction fails to acknowledge the thematic continuity of Cassavetes’ work: the fact, for instance, that Too Late Blues, Faces and A Woman Under the Influence all contain suicide attempts by women in the presence of men, or that male camaraderie and lack of communication between the sexes — treated successively in the first two sequences of Shadows –– have remained constants in his work. But notwithstanding the consistency of preoccupations, his films vary considerably in the extent to which they allow all their characters to have their say, reaching one extreme in the multiple viewpoints represented in Shadows and quite another in the coarse misogyny comprising virtually the entire viewpoint of Husbands. A Woman Under the Influence occupies a certain middle ground between these poles: if its narrative structure is dictated almost entirely by the viewpoint of Nick [Peter Falk] – so much so that Mabel’s six-month stay in hospital is neither depicted nor (improbably) marked by a single visit from her husband -– her own grasp of her situation assumes an increasing importance in the latter section of the film after she returns; and her children assume a pivotal role in the final scene, readmitting her into the family with a directness and lack of self-consciousness that neither Nick nor any of the in-laws seem capable of articulating, The danger of Cassavetes’ approach here and elsewhere is that of presenting an audience with a tabula rasa, in which one is invited to find one’s own biases and assumptions confirmed: hence the unpersuasive feminist readings that have been given to this film, along with equally unconvincing responses which take a reverse tack –- both positions reflecting nothing more than a spectator’s personal identification with one character or another, which the film’s method explicitly encourages. The notion that people’s understandings run deeper than their ideologies is certainly a contestable one, yet it operates as a prerequisite for appreciating Cassavetes’ work. In A Woman Under the Influence –- supported by strong performances by Peter Falk and Gena Rowlands, and by a general sense that none of the film-makers involved know the solutions to, or even the proper definitions of, the problems they are exploring — this dubious notion is compulsively enacted through raw nerves made flesh, and powerfully embodied in a family’s grappling efforts to achieve its own coherence.