From The Soho News (September 10, 1980). I’ve slightly altered the printed title (from “Fassbinder’s Weenie”) to remove the crude sexual double entendre which tended to be that weekly newspaper’s specialty. — J.R. 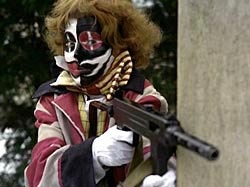 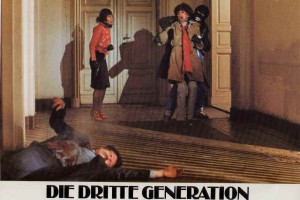 “In whatever way every citizen was capable of developing some kind of understanding for the actions and motives of the first and second generation of terrorists — or maybe not — to understand the motives of the third generation is more than difficult,” Fassbinder is quoted as saying, in the more than difficult pidgin English assigned to him in the pressbook. “To act in danger but without perspective,” he adds a little later, “the ecstasy of adventure experienced in the absence of ulterior motive;  this is what motivates The Third Generation.”

A terrorist film, in other words? I’d argue, on the contrary, a dull and rudderless one, principally concerned with the supposedly funky lint inside the collective navels of Herr Fassbinder and his talented entourage. Absence of ulterior motive, indeed: it’s all a matter of internal, in-group references — Fass and His Friends. The transsexual victim of In a Year of 13 Moons traipses through this film at one point — Fassbinder’s version of Jacques Demy bringing on Anouk Aimée in The Model Shop to  remind us of Lola. Eddie Constantine is around to remind us of Alphaville (not to mention Beware of a Holy Whore, which also used Constantine to remind us of Alphaville),  and the opening sequence’ features the gorgeous Fassbinder regular Hanna Schygulla in a high-rise Alphaville office, watching the end of Robert Bresson’s last film, The Devil, Probably, on TV. 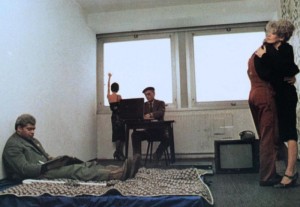 The Devil, Probably — an extraordinary film about the contemporary world, with a solid, visceral punch that makes The Third Generation seem like a bagful of marshmallows — was made over three years ago in France, and is still unavailable in the U.S. The Third Generation, a mediocre item in Fassbinder’s prolific, uneven oeuvre (at least judging from the dozen more that I’ve seen), was made about two years ago in Germany. But its writer-director-cameraman, an Orson Welles without ideas, has a strong advantage over Bresson. While the latter makes films only occasionally, each one a unique object, Fassbinder turns them out with the dull predictability of sausages – which automatically makes any individual weenie, like The Third Generation, part of a burgeoning industry.

The six sections of the movie are all prefaced with bits  of male graffiti found in diverse West Berlin toilets. The terrorists include an organizer (Volker Spengler), Constantine’s secretary (Schygulla), a record store clerk (Harry Baer), a sharpshooter (Raul Gimenez), a bank director’s wife (Margit Carstensen), a history teacher (Bulle Ogier, badly dubbed), and a black explosives expert (Gunther Kaufmann). Constantine, a computer magnate, has been subsidizing the group via Spengler for business reasons (the truth, I swear): with the recent drop in terrorism, it seems that the demand for computers has fallen off sharply. 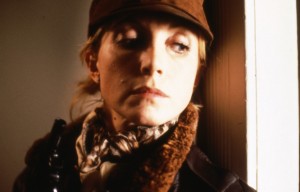 All these characters, Constantine included, wind up assuming the roles of victims. (Constantine winds up kidnapped by his own terrorist group, thereby permitting oodles of meaningless irony.) And because Daddy Fassbinder is clearly addicted to victims the way that some little boys are addicted to potato chips, a couple of more doomed, helpless victims –- an Oriental female junkie  (Y Sa Lo), a loner who reads Bakunin (Vitus Zeplichal) – are thrown in for spice, and duly knocked off by their compassionate director.

The history teacher is “comically” raped by the sharpshooter; the black explosives expert can’t find a job, and goes to pieces a second time when the junkie dies of an overdose (a striking, painterly image of him sobbing in an orange-red bathrobe at a table in the right foreground, while others stand and watch in the left background); the sharpshooter is machine-gunned in a Japanese restaurant. And so on. And so forth. 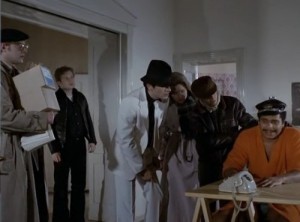 It might be instructive to compare Fassbinder’s sloppy, semi-coherent science-fiction with Godard’s ambivalent treatment of French Maoist terrorists in La Chinoise. The difference in political utility is particularly striking.  While La Chinoise was capable of changing the direction of some people’s lives, The Third Generation is not even likely to improve many conversations on the IRT. In contrast to the kaleidoscopic use of music in Godard’s rich movie, Fassbinder overloads his soundtrack like someone stuffing a suitcase, with Peer Raben’s electronic music functioning in an especially obtrusive, gratuitous and witless manner.

Let’s be fair, though. The Third Generation has the jazziest set of credits since Godard movies in the late ‘60s -– green letters flashing on and off, like computer technology. There’s a pretty jazzy opening title, too: “Dedicated to a true lover, hence probably to no one.” According to the late Jan Dawson in the autumn 1979 Sight and Sound,  “this text was reportedly the result of a misreading in the cutting room of ‘lover’ for ‘liberal’”. It’s a perverse kind of tribute to Fassbinder’s nihilism that either way, it doesn’t make the slightest bit of difference. 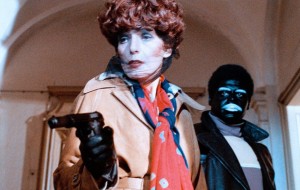