From the Chicago Reader. I’ve lost track of when this was published, but I know it wasn’t in October 1985, which is listed on the Reader’s web site — over two years before I joined the staff there.  I would guess this probably appeared around fourteen years later. — J.R. 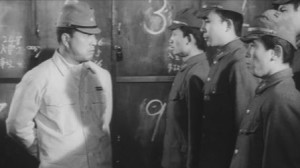 I’ve seen about a dozen of the 57 features directed by the fascinating and criminally neglected Yasuzo Masumura (1924-1986), and while no two are alike in style, many are socially subversive and most skirt the edges of exploitation filmmaking. This 1965 black-and-white ‘Scope comedy is also known as Yakuza Soldier; Shintaro Katsu, star of the popular Zatoichi films, plays an amiable, earthy yakuza thug drafted into Japan’s war with Manchuria prior to World War II, during which his main companion, the story’s narrator, is an intellectual with a similarly jaundiced view of military discipline. Made a year before the even more remarkable violent antiwar film Red Angel, this film features a lot of slapping and bone crunching, all of it administered by Japanese against other Japanese; significantly, the violence involving Manchurians is ignored. The irreverent ambience at times suggests Mister Roberts, with the pertinent difference that desertion is regarded as a sane and reasonable response to a soldier’s life. I don’t know if this movie prompted a sequel or series, but the ending certainly paves the way for something along those lines. A new 35-millimeter print will be shown. Facets Multimedia Center, 1517 W. Fullerton, Saturday, September 25, 12:30, 773-281-4114.