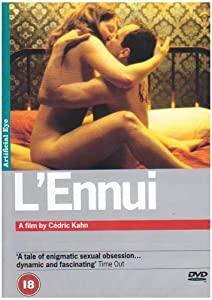 French movies about sexual and romantic obsession may be a dime a dozen, but what’s exceptional about Cedric Kahn’s 1998 film — apart from the fact that it’s a comedy — is its overall sense of sanity. A 40ish philosophy professor (Charles Berling) encounters the chunky, easygoing teenage model (Sophie Guillemin) of a recently deceased painter and starts meeting her for sex on a daily basis; gradually he becomes obsessed with her normality, trying to turn her into a femme fatale. Part of what makes this so funny is Guillemin’s unforced performance, which makes her imperturbable directness as believable as the professor’s neurosis. The sex scenes are fairly explicit, but to his credit Kahn doesn’t allow them to mythologize the characters. With Arielle Dombasle (sporting an uncharacteristic Louise Brooks hairdo) and the late Robert Kramer. In French with subtitles. 122 min. (JR)