It’s a contradiction in terms to speak of a classic avant-garde film — especially one that aims at both extreme provocation and innovation — but this rarely screened masterpiece (1951) by Jean-Isidore Isou, poet and founder of the French Lettrist movement, qualifies if anything does. Beginning, like a book, with a catalog of all the previous works by the same author, it proceeds with a lengthy account of an impassioned theoretical debate following a Paris cine-club screening, then with a love story of sorts, but the film’s narrative and dialogue are recounted almost entirely offscreen, in voice-overs; what we see is the hero walking in Paris’s Left Bank in the early 50s, eventually followed by other kinds of shots that are sometimes viewed upside down and often scratched over in various ways, making this partially an animated film. Though some of the rhetoric is dated (mainly a misogynistic rant or two, and some anti-jazz invective as objectionable as Theodor Adorno’s), the direct address to the audience via titles and commentary couldn’t be more pointed, and the passion of the whole enterprise is often breathtaking. As an indication of how influential this movie was and is in France, the last sequence of Olivier Assayas’s Irma Vep (see separate listing) would be unthinkable without its example. Among the famous people appearing in it are Blaise Cendrars and Jean Cocteau, the latter of whom once said, “The day will come, perhaps, when Isou’s style will be the fashion. Who can tell?” (JR) 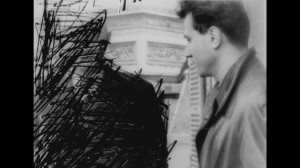 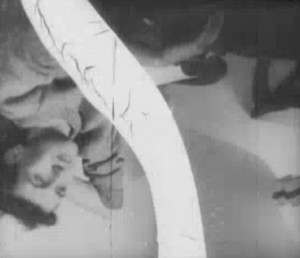