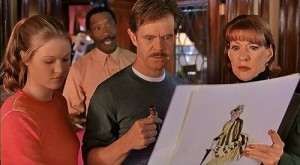 Writer-director David Mamet emulates Kaufman and Hart. A Hollywood film unit prepares to shoot a feature in a small town in Vermont, occasioning the sort of comic mishaps found in The Man Who Came to Dinner, though without comparably juicy characters. What Mamet serves up are a generically crass director (William H. Macy), a principled screenwriter (Philip Seymour Hoffman) who becomes romantically involved with the woman who runs the local bookstore (Rebecca Pidgeon), a starstruck mayor (Charles Durning), a lead actor who lusts after teenage girls (Alec Baldwin), and so on. I laughed a lot at the anti-Hollywood humor and generally had a fine time, in spite of the holier-than-thou hypocrisy that makes this movie easily and even intentionally Mamet’s most Hollywoodish picture to date. With Patti LuPone, Sarah Jessica Parker, David Paymer, and Julia Stiles. 106 min. (JR) 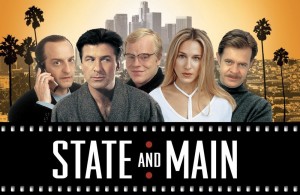