From the Chicago Reader (September 11, 1998). The illustration comes courtesy of Paul Cronin, who found it in Amos Vogel’s papers in Wisconsin. — J.R. 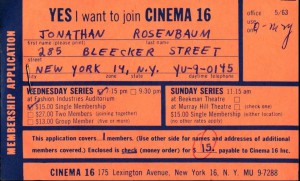 During its penultimate season I was lucky enough to be a member of the groundbreaking New York film society Cinema 16, where I got my first taste of Robert Bresson and Jacques Rivette. Run by Amos and Marcia Vogel between 1946 and 1963, Cinema 16 was special because it presented all kinds of “marginal” works that no one else was showing at the time. This lecture-presentation by Scott MacDonald — a specialist in independent and experimental film who’s edited a collection of scripts and three invaluable volumes of his own interviews with filmmakers — will include not only a historical account of Cinema 16’s work but a selection of remarkable shorts shown there, including Stan Brakhage’s Window Water Baby Moving (1959), Kenneth Anger’s Fireworks (1947) and Eaux d’Artifice (1953), Willard Maas’s Geography of the Body (1943), Robert Breer’s Cats (1956), and, from abroad, Arne Sucksdorff’s A Divided World (1948) and Georges Franju’s The Blood of the Beasts (1949). Franju’s film, a late addition to the program, is an extraordinary documentary about the everyday workings of a Paris slaughterhouse that manages to be shocking, lyrical, and highly moral–a good example of the great work Chicagoans almost never get to see. Chicago Historical Society, Clark at North, Tuesday, September 15, 7:00, 312-642-4600. –Jonathan Rosenbaum

Art accompanying story in printed newspaper (not available in this archive): The Blood of the Beasts film still.