Kenneth Branagh’s elephantine 70-millimeter adaptation of virtually the entire text of the Shakespeare play doesn’t seem to have an idea in its head (apart from a bad one, setting the action in the 19th century) though it tends to be lively, if scattershot, in some of its performances. If one can get past the painful miscasting of Jack Lemmon (as Marcellus), most of the performances are good or better than good (for me, Branagh’s Hamlet, Julie Christie’s Gertrude, and Billy Crystal’s grave digger take the top honors), and the palace decor swarms with odd afterthoughts. But too much music and too many gratuitous camera movements distract from these pleasures, and Branagh rarely has a firm sense of where to place the camera. (He awkwardly cuts away from Crystal’s Yorick speech, for instance.) Ophelia is the character Branagh seems to have the least feeling for, and Gertrude’s account of her death, which cries out for illustration, gets it only when it’s too late to make much of an impact. If you elected instead to see Orson Welles’s Othello twice in succession, you’d not only have more than an hour to spare but be making better use of your time. (JR) 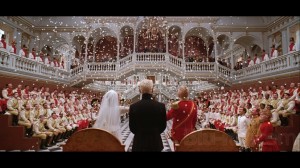