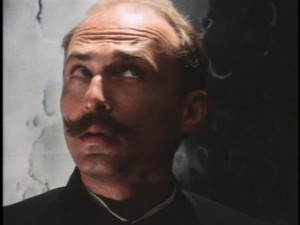 Ron Vawter (1948-1994), who died of AIDS, was one of those rare actors who, like Tilda Swinton in England and the late Delphine Seyrig in France, remained equally active in commercial and experimental productions. He played the psychiatrist in sex, lies, and videotape and appeared in such Hollywood features as The Silence of the Lambs and Philadelphia. But Vawter also played the male lead in Mark Rappaport’s ground-breaking and visually stunning Postcards and in Bruce and Norman Yonemoto’s Made in Hollywood (both from 1990) and appeared with Willem Dafoe and other members of the Wooster Group in Ken Kobland’s elegantly creepy and cadaverous video Flaubert Dreams of Travel but the Illness of His Mother Prevents It (1986), a series of surrealist tableaux presented with diverse sound elements. Remembering Ron includes the Rappaport and Kobland tapes, a ten-minute excerpt from Made in Hollywood (unfortunately too fragmented to give much sense of the whole), and Leslie Thornton’s brand-new The Last Time I Saw Ron. This powerful memoir combines glimpses of Vawter in a Belgian stage production, Philoktetes Variations, with diverse kinds of found and new footage and uncanny sound effects. The directness of Thornton’s own moving narration represents a breakthrough in her work. Presented by the Video Data Bank. John M. Flaxman Screening Room, 112 S. Michigan, Saturday, February 11, 5:30, 345-3550.