Finzan: A Dance For The Heroes

A young widow dares to reject the West African practice of wife inheritance when her brother-in-law claims her as his third wife. Cheick Oumar Sissoko’s 1990 Malian feature has been highly recommended to me by colleagues. (JR) Read more

Martin Campbell (Criminal Law) directs a watchable but instantly forgettable mystery thriller, written by James Hicks and Jeff Burkhart, about a successful lawyer (Barbara Hershey) who discovers that her client and lover (J.T. Walsh) is married to a former friend (Mary Beth Hurt), shortly before he is mysteriously murdered. Sam Shepard does his usual poker-faced bit as the police detective assigned to catch the killer, and Sheree North turns up in a smaller part. (JR) Read more

Kenneth Branagh (Henry V) directs and plays two roles in a show-offy American thriller scripted by Scott Frank that is loads of fun even if it’s ultimately strangled by its excesses. A Los Angeles private eye (Branagh) sets out to learn the identity of a beautiful amnesiac (Emma Thompson) who suffers from nightmares; he’s aided by an antique dealer (Derek Jacobi) with a flair for hypnosis. With his help the woman produces tales set in LA in the 40s about a European composer and his wife (Branagh and Thompson again), shot in black and white. As the twists come thick and fast and the plot gets progressively more and more baroque, Branagh shows himself to be at least as intelligent as Brian De Palma in delivering over-the-top stylistic filigree and every bit as willing to take his own two-dimensional postmodernism too seriously; with Andy Garcia, Hanna Schygulla, and an enjoyable turn by an uncredited Robin Williams (1991). (JR) Read more

This is probably Alan Parker’s best film, in part because it’s one of his most modest (1991). Following the brief career of a young white soul band in Dublin, it harks back in some ways to the youthful energies of Parker’s Fame, happily without the melodrama. The interactions of the ten-member group — including three female backup singers and an older sax player who romances them in turn while serving as the group’s guru — and the numbers themselves form the main bill of fare. Parker == working with a script by Dick Clement, Ian La Frenais, and Roddy Doyle, based on Doyle’s novel — keeps it all lively and watchable. If he can’t resist the occasional fancy or cutesy flourishes (e.g., a pair of twins who speak all their lines in unison) that tend to compromise his work, he still allows his material to exist on its own level and makes it fun to watch. With Robert Arkins, Michael Aherne, Angeline Ball, Maria Doyle, Johnny Murphy, and Dave Finnegan — a very appealing cast. (JR) Read more

Not surprisingly, this 1961 epic about the Spanish national hero, the Castilian warrior Rodrigo Diaz de Vivar, is often static as drama (with Charlton Heston and Sophia Loren used mainly as icons) and pretty dubious as history. But thanks to Anthony Mann’s splendid eye for landscape, composition, and spectaclein particular his striking use of the edges of the ‘Scope frame, a facet (among others) that is totally lost on TV and videothis is a rousing and often stirring show. Scripted by Frederic M. Frank and Philip Yordan and scored by Miklos Rozsa; Raf Vallone, Genevieve Page, and Herbert Lom costar. (JR) Read more

Best known for his work as an actor (he played the young Roy Scheider in All That Jazz and the lead in Home Movies), Keith Gordon made his directorial debut in and wrote the screenplay for this odd, cold stylistic exercise set at a Catholic school and based on a novel of the same title by Robert Cormier. The plot involves the school’s drive to sell twice as many boxes of chocolates as in the year previous, and the intervention of a sadistic hazing club known as the Vigils. Some reviewers have been bothered by the relative absence of backgrounds and motivations to the characters, but for Gordon’s arty purposes the stripped-down story and cast of characters are modeled to fit, and the insistent use of pop music on the sound track is equally effective. Thematically, the film recalls Calder Willingham’s End as a Man and the film version made of it (The Strange One, 1957); the presiding influence here seems to be Kubrick, and while the viewer may remain relatively uninvolved, the film’s address commands attention. With John Glover, Ilan Mitchell-Smith, Wally Ward, Doug Hutchinson, Jenny Wright, and Bud Cort, all of them quite serviceable. (JR) Read more

A special event in the Onion City Film Festival, this program of ten shorts by independent filmmakers in Frankfurt, West Germany, grew out of the ongoing student exchange program between the School of the Art Institute and the Staedelschule, Frankfurt; a matching program of Chicago independent films will be shown in Frankfurt next month. Among the works to be shown here are two by former exchange students, Ines Sommer’s O, A (composed out of small image and sound events, creating something which is close to a child’s vision) and Roland Krueger’s single-frame Chicago 1986/87, as well as Karin Hoerler’s animated Frisch, Eva Heldmann’s ironic version of a Brecht/Weill song, Regine Steenbock’s demystifying treatment of prostitution, and Thomas Feldmann’s depiction of his sexual fantasies in Discovery. Christine Noll Brinckmann’s The Primal Scene, the only one of these films I’ve been able to see, combines an exploration of diverse Frankfurt bedrooms with both Kay Starr’s Rock ‘n’ Roll Waltz and silence to provoke some of our own sexual fantasies. Read more

A relentlessly unfunny comedy about hypochondria that cries out for a Blake Edwards and receives instead clunky direction (by David Leland) that yields overwrought and strident performances. Jeff Daniels stars as an airline executive who starts to get anxiety attacks after his best friend dies. Joe Eszterhas (Betrayed) wrote the painful script, which features two awkward and extended dream sequences; Melanie Mayron, Michael Tucker, and Kathleen York costar. (JR) Read more

The second feature of John McNaughton (Henry: Portrait of a Serial Killer)for my money, more interesting and enjoyable (if also somewhat more scattershot in its focus) than the firstis an SF horror comedy about an exiled extraterrestrial killer in a makeshift human body who needs to borrow the heads of others to survive. Happily, this permits most of the members of the cast to play the alien at one point or another; more generally, it serves to illustrate a highly jaundiced view of urban lifewith the implication that even the nihilistic extraterrestrial is preferable in some ways to many of the self-absorbed creeps who cross his path. McNaughton keeps things moving with humor, gore, and intelligence. With Rae Dawn Chong and Tom Towles (1989). (JR) Read more

Jerome Boivin’s 1988 French feature about a dog and its relationship to its owners, narrated in a human voice (Maxime Leroux), is a few cuts below Samuel Fuller’s White Dog, not to mention Robert Bresson’s still greater Au hasard Balthazar (about the life of a donkey), two films with a related tragic undertow. But it’s also infinitely superior to Look Who’s Talkinga more irreverent parallel that comes to mind before one gets used to the conceit of a nonverbal narrator. Used largely as a satirical ploy to comment on the human characters, Baxter is a bull terrier owned successively by a fussy old woman (Lise Delamare), a newlywed couple (Evelyn Didi and Jean Mercure), and finally a disturbed little boy (Francois Driancourt) who’s obsessed with Hitler. It’s entirely to the credit of Boivin and cowriter Jacques Audiardand presumably their source novel, Ken Greenhall’s Hell Houndthat the apparent anthropomorphism of the canine hero eventually proves to be both superficial and deceptive; the divergence between animals and humansspecifically between an amoral dog and a premoral boyproves to be much more important. An unusual film that’s likely to stick in your craw in unexpected ways. (JR) Read more

Joel and Ethan Coen (Fargo) go to 1941 Hollywood in an oddball 1991 horror comedy about a blocked New York playwright (John Turturro) with a studio contract and the apparently normal insurance salesman (John Goodman) who lives next door. This creepy satire is full of laughs and flaky twists, but by the end you may still be scratching your head. As usual the Coen brothers brandish their adolescent smarminess and comic-book cynicismin this case trumpeting their apparent superiority to Clifford Odets (Turturro), William Faulkner (John Mahoney), and Jewish studio heads (Michael Lerner) while showing a middling ability to ape the moods and stylistic mannerisms of Roman Polanski, Stanley Kubrick, and David Lynch. Very competently mounted and acted (there are also juicy parts for Judy Davis, Tony Shalhoub, and Jon Polito), this is basically a midnight-movie gross-out in Sunday-afternoon art-house clothing. R, 117 min. (JR) Read more

Song of the Exile 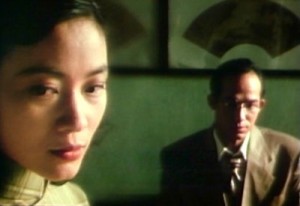 A lovely autobiographical feature by Boat People‘s Ann Hui, set in 1973. A young Chinese woman (Maggie Cheung) studying in London is summoned back to Hong Kong to attend her younger sister’s wedding, and finds herself in frequent conflict with her Japanese mother (Chang Shwu-Fen) until she accompanies her mother on her first trip back to Japan since being married. In Japan the daughter experiences much of the same cultural estrangement her mother went through when she came to China, and gradually the bond between mother and daughter becomes closer. Much of this is an interesting lesson for Westerners about some of the vast differences between Chinese and Japanese life. (A major problem for the daughter is the language barrier, and on a few occasions she can get by only in English.) Hui’s sensitive handling of her actors and her keen feeling for family dynamics never falter (1990).(JR) (Film Center, Art Institute, Columbus Drive at Jackson, Saturday, August 24, 4:00, and Monday, August 26, 6:00 and 8:00, 443-3737) Read more