The boldest and arguably the best of Peter Greenaway’s fiction features to date, this extremely odd and perverse conceptual piece certainly isn’t for every taste, although Sacha Vierny’s cinematography makes it so luscious that you may find yourself mesmerized in spite of yourself. The title refers to a European zoo; the curious plot involves two brothers who work as the zoo’s curators and who lose their wives in a freak auto accident. Only partially a narrative film, this elegant puzzle also involves amputees, painting, a menage a trois, and decomposing animals–along with many other things–which are intricately interrelated thanks to Greenaway’s icy brilliance. Definitely a one-of-a-kind movie and experience. With Andrea Ferreol, Brian and Eric Deacon, Francis Barber, and Joss Ackland. (Music Box, Tuesday and Wednesday, February 2 and 3) Read more 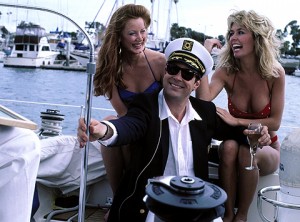 While this isn’t quite the return to form for satirist Michael Ritchie (Smile, Semi-Tough) that he apparently meant it to be, given his many years in the wilderness as an anonymous contract director, it’s funny enough in spots to suggest the possibility. Dan Aykroyd shines as a clever inmate at a Chicagoland mental hospital who contrives to escape, fly to LA, and take over the job of a wealthy Beverly Hills psychiatrist (Charles Grodin), who is flipping out and has temporarily retreated to London. The movie gets some nice laughs at the expense of exploitative shrinks, and develops a Capraesque scenario as Aykroyd proceeds to show up his predecessor with brassy nerve and populist wisdom. Unfortunately, what appears to be studio tampering makes the movie steadily lose coherence, and a couple of important secondary characters — Donna Dixon (another psychiatrist) and Walter Matthau (a con artist along for the ride) — seem to get shortchanged in the process. Still, this is agreeable fun while it lasts, and what remains of the script — by Steven Kampmann, Will Porter, and Sean Stein, adapted from a Ken Kolb novel — is satirically convincing much of the time. Read more

Good, corny fun develops when Italian-American widow Loretta Castorini (Cher) falls in love with her fiance’s brother Ronny Cammareri (Nicolas Cage). Director Norman Jewison and screenwriter John Patrick Shanley milk the New York settings, accents, and folkways for all they’re worth–although those familiar with certain Manhattan locations may be dismayed to find them transplanted in Brooklyn–and the broad Italian family humor gets so thick at times that you could cut it with a bread knife. Among the “adorable” secondary cast are Vincent Gardenia, Olympia Dukakis, Danny Aiello, Julie Bovasso, and Feodor Chaliapin, but most of the show belongs to Cher and Cage, both of whom are at their energetic best. Dick Hyman is in charge of the hyperbolic music, which starts off with “That’s Amore” to clue us all in to what we should expect. (Hillside Square, Old Orchard, Norridge, Chicago Ridge, Grove, Ridge, River Oaks, Woodfield, Ford City East, Yorktown, Deerbrook, Water Tower) Read more

Stylistically distinctive (with a rhythmically inventive use of jump cuts), impressively acted (by Jean-Francois Stevenin, Yves Afonso, and Carole Bouquet), and simultaneously unpredictable and rather bewildering as narrative, Jean-Francois Stevenin’s second feature, made in 1986, looks like nothing else in contemporary French cinema. Stevenin, who is mainly known as a rather ubiquitous actor, plays a character who accidentally runs into a boyhood chum (Afonso); together they decide to pay a surprise visit to another mutual childhood friend who now lives outside Grenoble–a mysterious figure who never makes an appearance and the film basically charts their long wait together, largely in the company of the missing friend’s wife (Bouquet). Arresting visually as well as aurally (the film is in direct sound), Double Messieurs manages to make all of its characters and their behavior sad as well as mysterious; a sense of broken dreams and an irretrievable past lurks behind the fitful, random actions and picturesque settings. Crew members are utilized in the cast, and Stevenin’s bizarre notations on the “buddy” movie stay firmly lodged in one’s memory. A Chicago premiere. (Film Center, Art Institute, Columbus Drive at Jackson, Saturday and Sunday, January 9 and 10, 6:00 and 8:00, 443-3737) Read more

Probably the most ferociously effective and polemically potent women’s prison film ever made, John Cromwell’s 1950 melodrama charts the gradual hardening of an innocent 19-year-old (Eleanor Parker) in relation to the brutality of her surroundings. Parker and Hope Emerson (as a sadistic prison guard) both received Oscar nominations for their roles here; others in the cast include Agnes Moorehead as the warden, Ellen Corby, Jan Sterling, Jane Darwell, and Gertrude Michael, all of them impressive. In many respects, this Warner Brothers film resembles the best and toughest socially conscious movies turned out by that studio during the 30s; a rare 35-millimeter archive print will be shown. (Film Center, Art Institute, Columbus Drive at Jackson, Tuesday, January 12, 8:00, and Wednesday, January 13, 6:00, 443-3737) Read more

The Secret Life Of Adolph Hitler

Research hasn’t been able to uncover the director of this 1958 short documentary feature, a German-American coproduction that includes interviews with Eva Braun and narration by Westbrook Van Vorhees (The March of Time), but the fact that the title misspells its subject’s first name isn’t very promising. (JR) Read more

To celebrate its fourth anniversary of screenings, the Experimental Film Coalition at Randolph St. Gallery is presenting a lively and varied program of (mainly) comic shorts. Leading off the evening is Paul Bartel’s paranoid black comedy The Secret Cinema (recently remade by Bartel as an Amazing Stories episode), to be followed by Germaine Dulac’s seminal and silent avant-garde masterpiece The Smiling Madame Beudet, a brand-new animated film by Sally Cruikshank called Face Like a Frog, Ramon Rivera Moret’s comic Cha Cha Cha, the latest film by Midwest animator Christopher Sullivan (Master of Ceremonies), Two Films I Never Made by Berkeley filmmaker Herb de Grasse, and Watersmith by the late Will Hindle, to whose memory the entire program is dedicated. Read more

A peculiar and neglected early Hitchcock stage adaptation (1932), notable because it was intended partly as an absurdist send-up and none of the contemporary reviewers got the point. (The opening sequence suggests a kind of delirium of continuity that the picture periodically returns to.) Most of the film is set in an abandoned house, where enjoyably murky intrigues abound, and the last ten minutes feature a chase sequence with miniatures that is almost as much fun. 63 min. (JR) Read more

How To Stuff A Wild Bikini

In his first American picture (1987) Scottish director Bill Forsyth adapts Marilynne Robinson’s much-acclaimed novel about two orphaned sisters (played by Sara Walker and Andrea Burchill) who share their ramshackle house with their eccentric aunt (Christine Lahti). The setting is the Pacific northwest in the 1950s, and Forsyth does a remarkable job with period detail and the beautiful natural settings, assisted by his own UK crew of cinematographer Michael Coulter, production designer Adrienne Atkinson, costume designer Mary-Jane Reyner, and editor Michael Ellis. But the most impressive thing about this haunting fable is Forsyth’s fluidity and grace as a storyteller, which gives this understated tale some of the resonance one associates with Terrence Malick’s Badlands and Days of Heaven. The story suggests a kind of feminist version of Huckleberry Finn, with the sisters playing Huck and Tom to their aunt’s Jim; the performances by all three actresses are impeccable. A film to be savored rather than gulped. (JR) Read more

While not really a success, Nicholas Ray’s 1956 film about urban Gypsies in color and ‘Scope, made between two of his masterpieces (Rebel Without a Cause and Bigger Than Life), has its share of interesting moments and vibrant energies, many of them tied to Ray’s abiding interest in the folkloric. In some respects this comes closer to the musical that Ray always dreamed of making than any of his other movies: there’s a defiant dance performed by Cornel Wilde on the street, a dynamic whip dance between Wilde and Jane Russell that’s even more kinetic, and a Gypsy chorus that figures in other parts. Definitely one of the more intriguing and neglected of Ray’s second-degree efforts. 85 min. (JR) Read more

This controversial fourth feature by Matsuo Yanagimachi, one of the leading Japanese independents, is the story of a middle-aged lumberjack and hunter named Tatsuo living in a remote coastal village. A single male in a matriarchal family and a Shinto-inspired pantheist, Tatsuo refuses to sell his land for the construction of a highway leading up to a new marina, and after a religious experience during the district’s annual fire festival he kills his entire family as well as himself. Inspired by a 1980 news story about a stone mason, this 1985 film has been criticized for its male narcissism and praised for Masaki Tamura’s striking on-location cinematography. (JR) Read more

Vasily Shukshin’s 1973 film in black-and-white ‘Scopecommonly considered his finest, and also known as That’s How It Isstars Shukshin and his wife (Lydia Fedoseeva-Shukshin) as a couple who travel to a southern spa by train from their Siberian village. Accompanied by a lot of balalaika music on the sound track, this rambling satire about the various interactions between a country bumpkin and various urban types whom he meets on his travelsincluding a snob, an engaging con artist, and a professor in linguisticsseems to lose something in translation. The film certainly has its moments (including a brief and bizarre dream sequence), and one can see why the late Shukshin was able to attract a fanatical cult in his own country; but it appears that much of his popularity rested on his grasp of local folkways and accentsdetails that are lost on non-Russian-speaking spectatorsand without this context, much of the proceedings comes across as fairly lukewarm, both as comedy and as cinema. As a glimpse into Siberian culture, though, the film has its moments of interest, and Shukshin and his wife are both engaging actors. (JR) Read more

The boldest and arguably one of the best of Peter Greenaway’s fiction features, this extremely odd and perverse conceptual piece (1986) certainly isn’t for every taste, although Sacha Vierny’s cinematography makes it so luscious that you may be mesmerized in spite of yourself. The title refers to a European zoo; the curious plot involves two brothers who work as the zoo’s curators and who lose their wives in a freak auto accident. Only partially a narrative film, this elegant puzzle also involves amputees, painting, a menage a trois, and decomposing animalsalong with many other thingswhich are intricately interrelated thanks to Greenaway’s icy brilliance. Definitely a one-of-a-kind movie. With Andrea Ferreol, Brian and Eric Deacon, Frances Barber, and Joss Ackland. 115 min. (JR) Read more

A feeble attempt at satire about LA lifestyles, this lightweight comedy stars David Packer as a spurned fiance from Ohio who travels out west to stay with his cousin (Scott McGinnis) and find a new life and love. Most of the story involves his dates with various oddball women whom he meets through a dating service and his yearning to find someone normal; unfortunately, this movie’s grasp of the normal is every bit as cliched and overdone as its pie-eyed attitude about what LA kooks are supposed to be like. The film misses the mark on nearly every target, but Charles Grodin is around for an amusing cameo (along with Kristy McNichol and Sally Kellerman). Other actors include Bridget Fonda, David Leisure, and Anthony Geary, but the main culprit is director Richard Martini and his own witless script. (JR) Read more