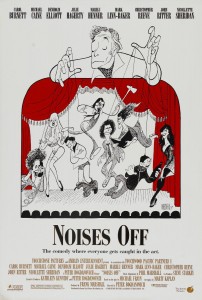 Peter Bogdanovich directs Marty Kaplan’s adaptation of Michael Frayn’s highly successful stage farce about a director (Michael Caine) and a cast of hapless actors trying to whip a sex farce into shape. The transition from stage to screen may be bumpy in spots, but this movie made me laugh more and much harder than What’s Up, Doc? ever did, and the long-take shooting style is executed with fluidity and precision. The basic idea is to hurtle us through three increasingly disastrous tryouts of the same first act, which might be loosely termed “Desperate Dress Rehearsal in Des Moines,” “Actors in Personal Disarray Backstage in Miami Beach,” and “Props in Revolt in Cleveland”; the fleetness of this raucous theme-and-variations form makes it easier to slide past the confusion of all the onstage and offstage intrigues. I can’t comment on the changes undergone by Frayn’s material, except to note that I find it hard to buy the closing artificial uplift, which seems to have been papered over the original’s very English sense of pathos and defeat. Ironically, after the warm and dense ensemble work of Texasville, Bogdanovich reverts here to the cold-blooded mechanics of choreographing one-trait characters, though the chilly class biases of his early urban comedies once again give way to something more egalitarian and balanced. Read more 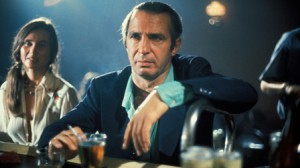 John Cassavetes’s first crime thriller, a postnoir masterpiece, failed miserably at the box office when first released in 1976, and a recut, shorter version released two years later didn’t fare much better. This is the first, longer, and in some ways better of the two versions; it’s easier to follow, despite reports that — or maybe because — Cassavetes had less to do with the editing (though he certainly approved it). A personal, deeply felt character study rather than a routine action picture, it follows Cosmo Vitelli (Ben Gazzara at his very best), the charismatic owner of an LA strip joint — simultaneously an asshole and a saint — who recklessly gambles his way into debt and has to bump off a Chinese bookie to settle his accounts. In many respects the film serves as a personal testament; what makes the tragicomic character of Cosmo so moving is its alter-ego relation to the filmmaker — the proud impresario and father figure of a tattered showbiz collective (read Cassavetes’s actors and filmmaking crew) who must compromise his ethics to keep his little family afloat (read Cassavetes’s career as a Hollywood actor). Peter Bogdanovich used Gazzara in a similar part in Saint Jack (1979), but as good as that film is, it doesn’t catch the exquisite warmth and delicacy of feeling of Cassavetes’s doom-ridden comedy-drama. Read more